CRISPS are the best British foodstuff, but is there really any f**king point whatsoever to ready salted ones? We investigate:

They cleanse the palate

If you’re enjoying a bracing midday meal of Devon roast beef crisps followed by sweet chilli and sour cream crisps, then a packet of ready salted between courses will calm the taste buds and cleanse the palate ready for the next flavour sensation. But you really should consider eating less crisps.

They punish the unwary

Every day inattentive shoppers grab misleadingly blue-tinged bags emblazoned with promises of sea salt only to be plunged into despair when they get home and discover there’s no eye-watering tang of chardonnay vinegar and their snack is bland and pointless. It’s a lesson that we all should be more alert and probably prevents car accidents.

They allow you to savour the natural flavours of the potato

The potato has no flavour. It’s why it’s the quintessential British dish, along with chicken. It exists as a blank space for bold flavours to be written upon, which is why garnishing it with nothing but salt is mundane and cowardly.

They don’t give you away

The crisps you choose are a far more reliable indicator of your personality than any of that star-sign guff. Bacon? Cheeky, fun, playful. Cheese ’n’ onion? Traditional, open-minded, friendly. Prawn cocktail? Either openly gay or closeted. Ready salted? Gives nothing away except that you’ve got something to hide, and it’s nasty.

They act as a check-and-balance on society

In our hedonistic society of easy credit and instant gratification it’s easy to believe your own personal pleasure is an inalienable right. But the very existence of ready salted crisps, the puritan on the shelf, reminds us that the world is hard and austere and all comes to ruin in the end.

Five types of twat who are already back at the pub 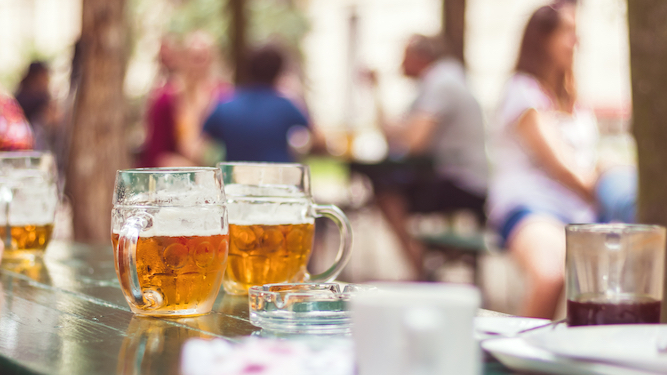 PUBS have barely reopened and here are the five types of twat who are already there, ruining it for everyone else.

A stalwart of any country pub, this red-faced bastard will sit in the corner taking up a four-person table all on his own, speaking to no-one and looking miserable to be there. With any luck he’ll be so pissed by 4pm he can stop being a shit to staff and stumble home to be a shit to his wife, three kids and four labradors.

Despite getting a crate delivered from their favourite indie brewery to home once a month, the fancy IPA twat will claim that their obscure craft beer, named and apparently themed after a South American brutalist architect, tastes best when handed to them by a man with a top-knot and an idea for a start-up that ‘totally revolutionises the folding bike industry’.

The ‘it’s been a rough year’ twat

These twats were the first back at the bar last year, did Eat Out To Help Out four times a week and have been meeting up with six different people every day for the last fortnight. They’ll also claim that they’ve had the worst year of anyone so have earned their all-day booking for the only table that’s not by the bins.

Flashing their CAMRA membership and loudly proclaiming their love of ‘pub culture’, these twats honestly believe that their dressed-up alcoholism is the only thing keeping their ‘community local’ alive. Expect them to bully their way into the indoor area claiming they’ve been given special permission by the landlord to sit at their usual table, national law be damned.

While most of us completely forgot to book, the meticulously-organised twat will have had their slot for months and will be making the most of every second. Laser-focused on packing a whole night’s drinking into a four-hour time period, they have alerts set up on their phone to get another round in every 15 minutes. Godspeed to them and their livers, but here’s hoping they collapse soon so us disorganised twats get a go.