The best foods to buy to throw away

DOING your online supermarket shop? It’s your duty as a consumer to buy all these foods that satisfy your aspirations but you won’t eat:

Iceberg lettuce for twats, with as much flavour as a wet sock. Is it even meant to be good for you any more? And why does it scatter itself around the fridge so freely, like there’s a miniature 90s Jamie Oliver hiding in there?

Twigs masquerading as food. Not even militant vegans tolerate them. A remnant of the 1980s that would be better used as garden compost. Okay, it makes you shit, but if that’s not a pressing need stop kidding yourself and buy Pop Tarts.

Isn’t it fun to have a pineapple about the place, jaunty and exotic? How exactly do you cut into it? Or skin it? There doesn’t seem to be an obvious solution, and now tiny black flies are buzzing around the kitchen, and it’s not as firm to the touch, and bin.

Boil sand instead. The taste and texture will be much the same and it will make a similar beach out of your kitchen cupboard, spilling everywhere and getting into every crevice.

You could have savoured the fruits of centuries of artisan cheesemaking expertise – an oozing camembert, the crumbliest cheddar, the feisty mouth punch of a gorgonzola. But no, here you are, trying to make a cheese toastie from synthetic fibres.

Take a look, the next time you put a newly-purchased tub of coleslaw in the fridge, and you might even catch the use-by date spinning down. You may get to eat three forkfuls before it becomes a health hazard.

Couple gets puppy so they will never have sex again 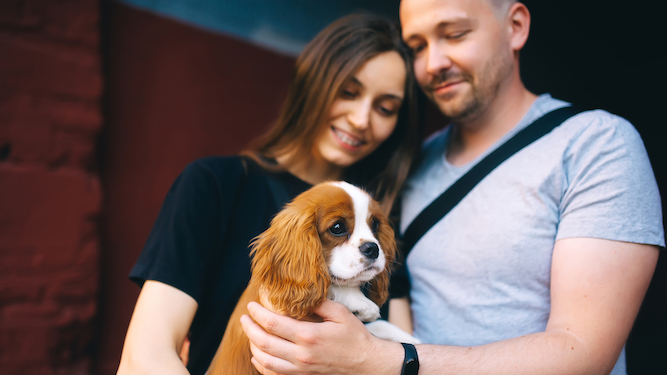 A COUPLE have bought a puppy so they finally have a legitimate excuse for giving up sex completely.

Nikki and Ben Hollis got their eight-week-old spaniel Luchador in December, and say not only do they no longer make love but they do not even have to feel guilty.

Nikki said: “I’d recommend a puppy to anyone who wants joy, companionship and a total cessation of physical intimacy with their life partner.

“You don’t say as much, of course. First, you attempt sex as normal, but the puppy leaps up on the bed, thinking it’s a kind of fun game that he wants to take part in.

“So, you shut him outside the bedroom door, at which point he wails unnervingly and scrabbles his paws frantically under the door, which kills the mood.

“Finally you discuss slightly desperate alternatives like shutting the puppy in the garden or only doing it when he’s two rooms away, but you know neither of you mean it and there’s a palpable sense of relief.

“Then, you give up and put the kettle on.”