The panic-buying bastard's guide to ruining it for everyone

LOADING your garage with goods with no consideration for others? Here’s how to bugger up other people’s Christmases to the limit:

Your life will not be over if you don’t get bread sauce, but that’s not the attitude. Jostle, hassle and abuse people in a heaving mass of fellow shoppers until Asda resembles the fall of Saigon.

Only leave the crap booze

The drinks section should look as if it’s been ravaged by alcohol-hungry locusts. But leave the shit, so another harassed shopper will excitedly see a few last bottles of wine on the shelf, only to be crushed by disappointment as they realise it’s f**king Eisberg.

Not since spring have we been afraid to wipe our arses, so Christmas must not be about presents and pudding but the Boxing Day dump and the dwindling toilet paper reserves. Ideally whole families should have their enjoyment of Dunkirk ruined by holding one in.

Get four turkeys, just in case

Massively over-purchase any key Christmas item – if you’ve got enough gravy to last until 2030, that’s great because other people won’t be getting any. And isn’t that the reason for the season?

Tampons don’t go off, and it’s a real pain if there aren’t any, so buy lots. Toothpaste is pretty important too, so if you can afford it get 400 tubes. You’ll use it eventually, with what’s coming, or trade it for a hatful of stew in the bombed-out ruins of Buckingham Palace.

Fight in the supermarket

Be so fixated on that 90p Terry’s Chocolate Orange that you’ll trade punches with Captain Tom without balking. And if that four-year-old girl gets between you the last Baby Yoda, she knew the risk she was taking. 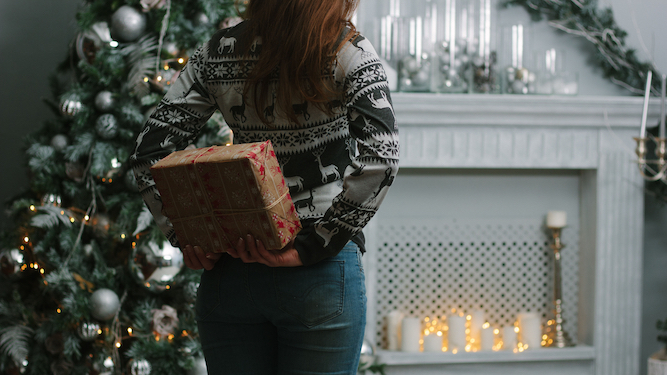 AN original and imaginative gift shows a loved one how much you care, but you haven’t taken the time or trouble to choose anything like these:

Something you’ve made yourself

Crafting a gift with your own hands is generosity of spirit in its purest form, and only attainable for people willing to set aside time, money and patience for the sake of others. It doesn’t matter that it would likely be shit. That jar of chutney would have got you laid, if you’d bothered.

Something you’ve had personalised

An engraved bracelet, an embossed journal, a bottle opener with their initials on: even the most generic gifts become thoughtful when you have ordered them with enough time to have them tailored to the giftee. Scrawling someone’s name on a wine label is nowhere near. And you haven’t even done that.

An object made in a place they love

Sourcing a piece of jewellery, ceramic or clothing from a city or country that your loved one has visited and enjoyed shows such kindness that you wish you’d thought of it. It’s too late now, like it always is.

A book on a topic they’re passionate about

A book on a subject about which they are curious would show not only that you listen to your dear ones, but also that you bother to remember what they have told you. Neither is a possibility for you, in this world or the next.

Cash is a way of indulging someone that works for everyone from the cash-strapped to the greedy rich. Although it may seem impersonal, you do have to get to a cashpoint, and organise a card as well as an envelope in advance to make it truly thoughtful, which is only possible for those who actually care and think about others.