The vegan's guide to totally ruining your next meal

THE abundance of vegan food options now available means that removing the deliciousness of meat is just the start of ruining a meal. Here are some ideas.

Fry up some seitan

There’s a reason this wheat-based tofu-like product is pronounced ‘Satan’. Although it comes with the enticing promise of being a meat substitute saviour, the fact that it’s an elastic mass of flavourless gluten is likely to take you to a very dark place once you start eating.

In order to feel more disappointed with a meal, vegans like to spend excess amounts of time and energy on preparing it. Whip up a complicated marinade from scratch and then leave the soy product of your nightmares soaking in it for hours. Delicious.

Want to make tofu even harder to eat? It’s not always necessary to fry or bake it so there is at least texture if not flavour. Simply chop it up into squishy cubes and toss them over a salad. Don’t cry, it’s good for you.

Add a sprinkle of nutritional yeast

The only thing that truly belongs on top of baked beans or pasta is a shit ton of grated cheese, but we vegans are able to take this pleasure away with a sprinkling of something called ‘nutritional yeast’. It looks like fish food and smells like a bin on a hot day. Bon appetit.

Aquafaba is the water that comes out of a tin of chickpeas which can be whisked up just like egg whites. However, unlike egg whites, it makes a terrible version of a meringue with a horribly savoury aftertaste. But we wouldn’t be vegans if we didn’t enjoy suffering, so bring them on. 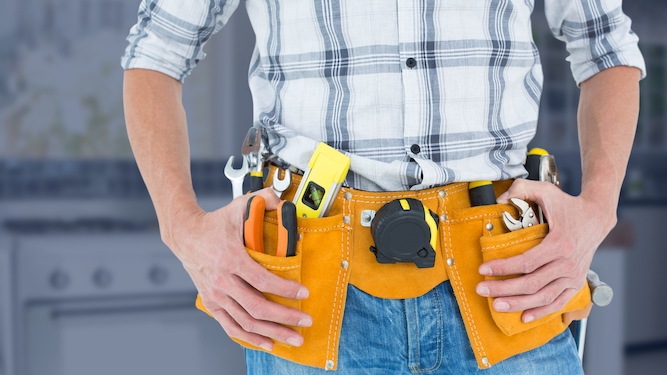 A MAN’S tool purchases were made in the pretence of doing DIY when he really plans to wear a tool belt like Batman.

Stephen Malley thought it would be handy to have some useful items like a drill, a hammer and a piece of rope that looks a bit like a Bat-Lasso, along with a belt to keep them in.

Malley’s girlfriend Charlotte Phelps said: “Whatever bullshit reason he gave, he got a tool belt because he wants to look like the caped crusader.

“Sadly, he doesn’t resemble a muscular crime fighter with an intriguing dark side. He resembles a balding, 35 year-old IT consultant wearing a tool belt.

“He even wears it when there’s no DIY to be done. He just wanders around, occasionally reaching for his glue gun or throwing a spanner at the couch as if it’s one of those boomerang things Batman had.

“Plus, he’s shit at DIY. I don’t recall a scene in any of the films where Bruce Wayne is reduced to tears after spending three hours failing to put up a shelf.