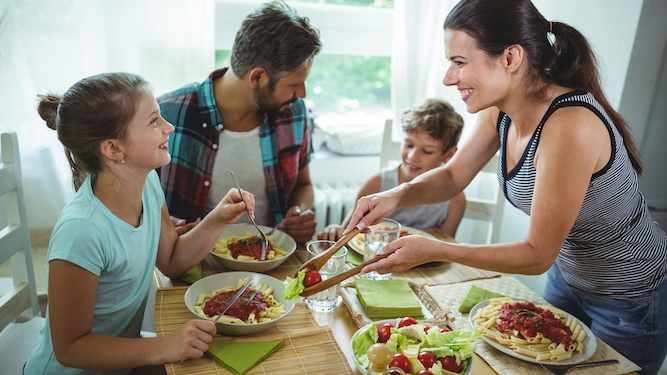 A WOMAN who has realised that the meal she has prepared happens to be vegan will not stop banging on about it.

Hannah Tomlinson of Wallingford is a committed carnivore who has never even contemplated the inconvenience of giving up meat but is determined to wring every drop of moral superiority from this happy accident.

She said: “It’s vegan. Are you enjoying it? Did you know it’s vegan? Because it’s vegan.

“I’ve always suspected that deep down I was a caring person who thinks about the planet so I guess this is proof. And I already feel so healthy! And thinner.

“Now I get why vegans are into it. The sense of self-righteousness is killer. It’s almost as good as the feeling I get from sinking my teeth into a rare steak.

“Yes I’ll be eating a chocolate mousse for pudding and drinking milk before bed and frying up bacon for breakfast, but the important thing is I’ve taken my first steps to a lifestyle of sanctimonious martyrdom.

“From now on, I’m definitely going to describe myself as ‘flexitarian’.”

How to convince the EU you really, really want a No Deal Brexit YOU’RE in talks with the EU about a trade deal, as you have been for four years, but need to convince them you don’t actually want one. How do you do it?

Tell everyone you don’t want a deal loudly, so they overhear

While still trying to get a deal in talks, loudly tell all your friends in the newspapers actually not having a deal is the best deal of all and really you want that and you’re totally prepared for it. The EU will hear you and be convinced.

Appointing one of Rupert Murdoch’s mates as trade negotiator who says ‘no way mate’ to any attempt to compromise really gets the message across. It’s like when we send someone crap to Eurovision to show our contempt for it, then lose.

Introduce a load of bills stamping all over the agreement you signed last year to fool the EU into thinking you’ve already decided against a deal and are only still in talks to be polite.

Set an unrealistically early deadline and proclaim that it is the final deadline, that no other deadlines will be considered, and if it’s passed then it’s all over and there is no possibility of going back, just like you did twice this time last year.

Order Britain’s fish back to our waters

Issue a proclamation to Britain’s fish to return to our territorial waters before the deadline to make sure they’re not trapped in dirty non-sovereign French water when it all happens. Warn them that defecting would be considered an act of war.

Perform Wannabe by the Spice Girls, but replace ‘zig-a-zig-aah’ with ‘no deal Brexit’

Launch into a beautifully choreographed rendition of Wannabe with all the lyrics rewritten to reflect how much you ‘really, really want’ a no-deal Brexit. Gary Barlow will do you a draft, he’s one of us.

Finally, making clear that you’re only doing it as a favour to the EU, grudgingly accept the same deal that’s been on the table since 2016 and tell all your mates in the newspapers it’s a triumph for Britain up there with Dunkirk. Bask in the glory.