Anyone returning home from Portugal is dirty and diseased starting… now

BRITISH holidaymakers in Portugal are filthy virus-spreaders who must quarantine for ten days as of… now, the government has confirmed.

Ministers have been careful to contrast yesterday’s returnees, good, upstanding citizens who put society before themselves, with the selfish, disease-ridden Typhoid Marys returning after 4am today.

Nigel Huddleston, minister for tourism, said: “If only all our decaying, dangerous army barracks weren’t already full of refugees, we could stick these septic scum in them.

“Let me reiterate that it was entirely within government guidelines to visit Portugal, which was on our green list, and I hope those people who returned in time enjoyed their holiday. However.

“Anyone who left these shores knew full well we could change the rules arbitrarily at any moment and by not arranging their immediate return, they have proved themselves mindless and lawless vermin who deserve ten years inside, not ten days.

“There are no excuses. 60 of you out for a wedding? More than enough to charter a plane. Retired couple visiting their grandchild? When better to learn to sail? Shifless, dirty bastards.”

Nathan Muir, aged 47, said: “I was booked on a flight at midnight so I was compliant and blameless, but it was cancelled so I’m unclean and infested. Such a fine line.” 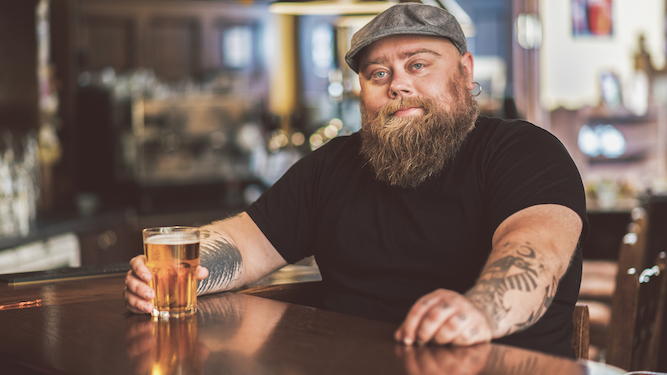 NO pub would be complete without a selection of local legends sharing anecdotes that are obviously bollocks. Theses are the six key characters:

Fishing with Roy Keane? Abseiling with Billie Piper? Skeet-shooting with Michael Portillo? This guy runs into the rich and famous everywhere he goes. And did you know that just before you got here Kate Moss was in to use the loo and cadge a fag?

With experience of every type of woman, of position and location, the Casanova has romped his way through every sexual scenario you can think of. He’s only in this quiet pub on a Tuesday night to give his cock a break. Has he ever actually been seen with a woman? No way. Because he keeps that separate.

Despite having no professional training or visible signs of athleticism, this patron is always the first to remind you about his freakish natural sporting skills. He could take a set from Serena Williams, take a hole from Rory McElroy, and if he hadn’t pulled his back at the weekend, he’d show you how he can kick a football the length of two pitches.

Bought something? Should’ve checked with him first. Whether it’s a pint of lager, a washing machine or a house, he’s there to tell you that you got the wrong one, what’s wrong with the one you got, and he knows a bloke who could have got it cheaper. Watch him tut and shake his head at your watch, smartphone and pork scratchings.

Aliens, lizard people, the Illuminati meeting every other Thursday in a room over the corner shop; the Conspiracy Theorist will take you on a journey of subterfuge and secrets the second you walk in the door. And there’s incontrovertible proof, oh yes. Just watch this three-hour YouTube video being shoved into your face.

Ever thought a right-wing talking point was bollocks? How wrong you were. No matter whether it’s asylum seekers getting free houses or transes getting ordinary working lads fired one day before they got their pension, he can substantiate every single one with an anecdote. Bet you feel a dick now, yeah?