A MAN who has discovered a positive test on the side of the bathroom sink is really hoping it is for Covid-19.

Martin Bishop came across the test while going for a piss five minutes ago, and has been panicking that his girlfriend might not have a debilitating illness ever since.

He said: “If it’s a positive Covid test, that’s bad news. In the immediate moment. But long-term it’s better than at least one possible alternative.

“I’ve worked out the maths on this. We can afford to self-isolate, we can claim £500 from the government, we’d still have more hand sanitiser than we could possibly need. We’ll watch a box-set, it might even be fun.

“But if it’s the other thing that’s our lives hugely disrupted for the next five years, managing on one salary, massive bills and of course the knock-on effect on our mental health. So I think maybe Covid’s the better decision at the moment.

“God, I hope I go out there and she tells me that little solid line means she’s got some very bad news. That would be the absolute best possible outcome in this situation.” 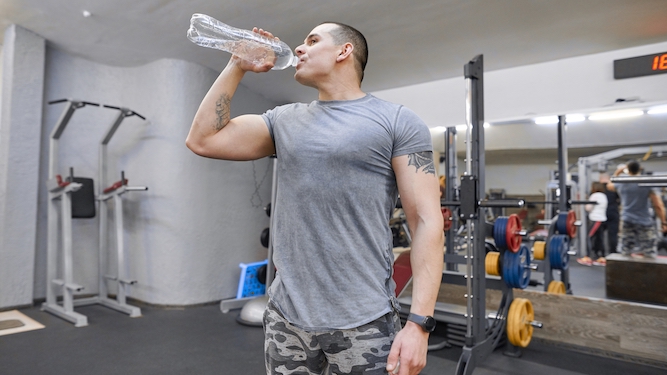 DO YOU drag yourself to the twatting gym only to find it’s full of twats using all the twatting equipment? Use our comprehensive spotters’ guide to gym wankers:

Perspiration is to be expected when working out, but this freely sweating arsehole fountains sweat, spit and tears wherever they go. Really the cross-trainer should be burned after they’ve used it, but you’ve been queuing for 20 minutes.

Or there’s their opposite, the obnoxious shithead who believes they’re the only person in the gym getting a bit dehydrated and puts their entire gob over the spigot. Then fills their bottle. Then drains their bottle and fills it again. And they’ll be back.

The shit dance-pop soundtrack of the gym wouldn’t be complete without the anguished cries of some prick keen to emphasise just how hard he’s pushing himself. It’s a pisstake when it’s a pro tennis player, never mind a middle manager from Nantwich trying to beat his PB of nine push-ups in a row.

There’s nothing like waiting for an elliptical being used by someone going about two rotations a minute while simultaneously chatting loudly on the phone to their shit-thick colleague and picking which gym selfie to upload to Insta next. Fitness goals, yeah?

Scientists have yet to pinpoint the DNA sequence that causes a stranger to check how fast you’re going on the exercise bike and go twice as fast, but hopefully it will be cleansed from the gene pool via natural selection.

Did you know that every time a woman joins a gym, she’s randomly assigned a male stranger who will try to improve her form? Try and enjoy the treadmill with some six-foot hunk of meat breathing down your neck. You’d run better if you released some tension by stamping on his nuts.