Brown dress fails to make it all better

THOUSANDS of women who bought a light brown dress have found that they are still not princesses. No takers for the shiny pink jerkin, thus far

The £175 dress, which features a bandage-style design but is nicer than it sounds, has been hugely popular among women tormented by a desperate, media-fuelled sense of their own inferiority and had hoped it would magically transform them into someone better.

Sales co-ordinator Nikki Hollis said: “When I saw the dress in Modern Self-Hating Woman magazine next to an article about how sticking ice cubes up men’s bums makes them want to marry you, I thought this is it. This is going to be the thing that finally makes everyone think I’m amazing, or at least bearable.

“But when it arrived today I was not magically transformed into a beautiful swan-necked princess, complete with bejewelled carriage piloted by Cockney mice in red frock coats.

“I looked in the mirror and it was just me. Shit old me. With fatty deposits above my knees and an incipient belly that no amount of low-calorie chocolate drinks can shift.

“Perhaps I should have returned the dress to the shop, but instead I took it into the garden, burned it and then ate the ashes.”

“That dress will be in next month’s edition, or the one after.

“But keep buying the things because one day, one of the things will make you beautiful. Just not today.”

She added: “Also in next month’s issue, an article about how putting crab paste on men’s bollocks can make them stay in your house for more than four hours. It’s the best thing we’ve cut and pasted off the internet in ages.”

Vince Cable has been reading the papers again 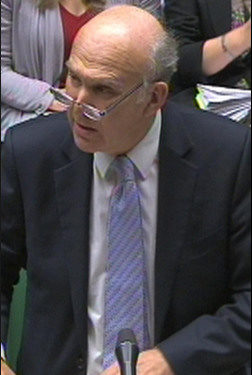 VINCE Cable has predicted another economic crash after reading about it in the newspapers. In 2008 the so-called ‘Sage of Twickenham’ was one of the first politicians to read newspaper articles warning of a financial crisis and then tell people what he had been reading about.

Julian Cook, chief economist at Donnelly-McPartlin, said: “It is a fool who does not listen to Vince Cable. He has an uncanny gift. It’s almost as if he’s reading the article, remembering what it was about and then repeating it.

“Some say it’s genius while others say it’s voodoo. Personally, I believe him to be the 14th reincarnation of Merlin.”

But Martin Bishop, Vince Cable analyst at Madeley-Finnegan, said: “Because he runs a government department which is essentially pointless he has access to a lot more newspaper reading time than almost anyone in Britain.

“This is a man who really, really knows what’s in the papers.”

A source close to the business secretary said: “He sits in his office, reads a big pile of stuff and then goes into a sort of trance. His eyes wobble, his ears go a bit red, his cheeks puff out and then he makes a very long raspberry sound.

“Then all of a sudden he stands up, waves the Financial Times above his head and shouts, ‘oh no, have you seen this?’.

“It doesn’t get much sagier than that.”

Martin Bishop added: “The more I think about it, I’m not sure the business secretary telling me the economy is about to crash is tremendously helpful.

“It’s like having a plumber who comes to your house, drinks a lot of tea and says ‘if I just sit here all day that pipe is going to burst’.

“Fix it. You monumental arse.”