DOCTORS in Wales are being urged to treat depression with a strong dose of the Severn Bridge.

As South Wales topped the league for anti-depressant prescriptions, experts said the £5.40 toll was not only more effective but would ease financial pressure on the NHS.

A spokesman for the British Medical Association said: "A course of Seroxat is 50 or 60 quid, but for a fiver we can get them to South Gloucestershire where they'd at least have a chance, dammit."

He added: "And for those who get halfway across and then can't face going on or turning back, they can always just jump off. If they survive, the estuary tides will no doubt take them on a thrilling adventure."

Welsh GP Tom Booker said: "There are other ways to combat depression, but getting some fresh air would force you to look at more Wales, while exercise would involve being trapped in a room with dozens of sweaty Welsh people.

"A healthy diet helps, but around here that's like asking for a honey-roasted unicorn in a bap."

He added: "The Severn Bridge was supposed to alleviate the suffering of thousands of people in South Wales, but instead they all just stare at it, calling it 'Satan’s river-stick'. They even sing songs about it. It's hateful."

The treatment of depression in Wales has advanced in recent years, with courses of prescription drugs replacing the traditional method of being whacked over the head with a sock-full of foxglove by a half-pissed druid.

Brown Hails 'Budget From The Future' 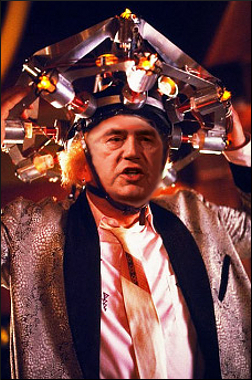 THIS month's budget will be the first to be beamed into the House of Commons directly from the future, Gordon Brown has revealed.

The prime minister said Britain's economic recovery would be based on electric bubble cars, floating skateboards and nuclear De Loreans powered by bits of old fruit.

In an interview with the Independent, Mr Brown revealed that chancellor Alistair Darling has travelled to the year 2060 to gather evidence of future transportation methods as well as the results of every sporting fixture for the next 51 years.

He said: "Everything is going to be electric and we'll be able to make electricity from potatoes and banana skins. It will cost a lot of money but we can afford it because we can bet on all the horse races and stuff."

Dr Julian Cook, director of political psychiatry at Reading University, said: "It has been fascinating to watch the steady evolution of the prime minister's dementia over the last few months.

"From thinking he was not only Spiderman but also his own arch-nemesis Doctor Octopus, to claiming he had created a new world order in a shed in the Docklands.

"And now he seems to be living in some kind of electric fantasy world where we all drive around in banana-powered De Loreans and wear self-fastening shoes. I'm really going to miss him."

A beleaguered Downing Street spokesman said last night: "He had a Back to the Future marathon after the G20 and it got him all worked up. Seriously, just forget it."