BOILING up a bag of foul smelling old twigs sold to you by a man who has no medical knowledge will not cure you of cancer, a shock new report claims today.

Applying a poultice of mashed up leaves to yourself after a horrendous car crash is also unlikely to lead to a rapid and sustained recovery from your terrible injuries.

However, handing over huge sums of money to a plausible individual in a white coat for a bit of bark in a jar is certain to cure herbalists of their lack of an indoor pool, the report added.

Dr Wayne Hayes, chief herbalist at Hayes Herbals, said he was astounded at the claims that twigs did not have incredible healing powers after all.

He said: “If I was not already in a wheelchair after having both my legs amputated following a nasty bout of Necrotising Fasciitis which, incidentally, I controlled with two aniseed balls and a cup of Silver Birch tea, I would go round and see whoever wrote this report and give them a good kicking.

“To suggest that boiled twigs are not the most effective treatment against cancer flies in the face of thousands of years of medical knowledge. The next thing they will say is that homeopathy is a load of old rubbish which defies the laws of physics.”

Gladys Tazer, 86, said her husband Ron had benefited hugely from his treatment at Hayes Herbals after he sought Dr Hayes’ advice on an ingrowing toe-nail.

She said: “Wayne was so helpful. He even gave Ron a lift to the building society in his Jag when we did not have enough money in the house to pay for his treatment.

“I know Ron would have been dead in weeks if Wayne had not treated him. But thanks to Wayne and his wonder twigs, Ron and I gained a few extra precious months together, marred only slightly by his constant vomiting.”

I Will Now Memorise The Bible, Declares The Great Camerooni 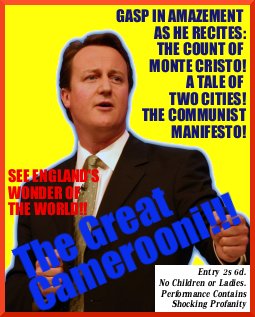 IN a prodigious display of intellectual acrobatics, the likes of which is rarely seen outside the Orient, the Great Camerooni will memorise and recite the King James Bible from Genesis to Revelation.

England's most miraculous showman will take his terrifying and mesmerising spectacular on a tour of the Nation's seaside resorts, culminating in a three week run at the Scarborough Empire.

Granting a rare audience with The Daily Mashings and Haberdashers' Gazette, the Great Camerooni, said: "My gifts are truly mysterious. At times I feel they are my master.

"Little did I know when I sat at the feet of the Great Swami of Hyderabad that he would deliver me such a blessing and such a curse."

With his attempt to memorise and recite the entire Bible the Great Camerooni has thrown down the gauntlet to his great rival from the windy North, the Terrible Broon.

The dark and fearsome Scotsman thrilled London society this season with his astonishing ability to recall every line of Mr Lloyd George's Budget of 1909.

The Great Camerooni said: "Only a very few can truly understand the majesty of these gifts. And fewer still can hope to wrestle with this fascinating beast and use its power for good rather than evil.

"Of course, it does help enormously if one went to Eton."