WOMEN who eat Special 'K' around the time of conception are more likely to have a boy, but it will be a girly boy, according to new research.

Scientists claim the low calorie breakfast cereal can influence the chance of having a boy who enjoys musicals or, if it is mixed with strawberries, a girl who enjoys other girls.

Dr Tom Logan, of the Institute for Studies, said: "We discovered that more than 60% of those who conceived with Special 'K' are now either managing their son's career or helping him sew on the extra sequins."

Meanwhile the study found that women who want to have rugged male children must devour large handfuls of dry porridge while having sex in the back of a Land Rover.

Dr Logan added: "Alpen tends to produce those weedy, self- absorbed types whose band will never get a record deal.

"Frosties and Cocopops produce the kind of boys who are well meaning but wear colourful socks, know all the words to Bat Out of Hell and have to be told when to leave.

"Weetabix, Cheerios and Crunchy Nut Cornflakes will produce healthy, intelligent high-flyers whose only flaw is to be thrashed twice a week by a gang of Nazi whores.

"And if you eat a lot of Shredded Wheat, you'll end up with what is, basically, Alistair Darling."

Carla Bruni To Be The New Face Of Ginsters 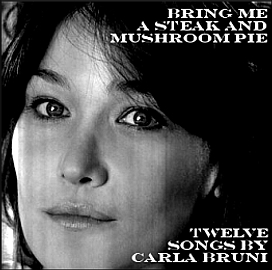 CARLA Bruni, the incredibly hot wife of French President Nicolas Sarkozy, is to be the new face of Ginsters savoury treats.

The Cornish firm said the former supermodel and singer would bring a touch of continental finesse to its irresistible range of bakes, pastries and spicy tortilla wraps.

The first television commercial will feature Bruni as a plumber, driving down the A34, when she is suddenly overwhelmed by an insatiable desire for a Ploughman's Roll and a Buffet Bar.

She pulls in at a petrol station near Didcot, runs into the shop, tears the wrapper from the Ginsters savouries and starts devouring them.

A member of staff approaches, but soon backs off when she snarls at him with the sound of an angry tiger. The commercial ends with the slogan, 'Imagine Smearing a Cheese and Onion Slice Across Carla Bruni's Bum'.

Bruni said she first dreamed of working with Ginsters while writing her third album, Bring Me a Steak and Mushroom Pie.

The French first lady said last night: "Whenever Nicolas and I travel to meet foreign heads of state, I always ensure ze fridge on our official plane is stocked with at least two dozen Mexican Spicy Chicken Pasties. I eat zem cold."

She added: "I have to admit zat when I attended ze official banquet at Buckingham Palace I could not finish my dinner because I had spent all afternoon is ze bath with a copy of TV Quick and an enormous pile of scotch eggs."