Fat Kids To Be Chased To School By Dogs

CARS are to be banned from the school run and children chased to their classes by angry dogs under new Government plans to eliminate childhood obesity by 2010.

The children will initially be given a ten minute start on the dogs, but this lead will be phased out over two years, after which the dogs will also be poked a bit with sticks before being released.

The kids will be given a pound of steak mince and a cat to throw on the ground to distract the dogs should they get to close, however once both have been used up “they are on their own”, the Government said.

Ed Balls, the minister for school children, said drastic measures were needed because most kids were now so fat they had to lie down at all times or else their bones would crumble under their own weight.

He said: “I personally have seen a six year old literally dissolve in his own fat before my eyes. We have to act now or else the whole country could soon be ankle deep in wobbly child blubber. ”

Mr Balls also warned that if the latest measures to halt the rise in obesity failed then the Government would not hesitate to ban children from school altogether to solve the problem.

He said: “Our research shows a direct link between attendance at school and rising child weight. Before they all started full time education British children were all so nice and thin they could fit up chimneys and crawl under fast moving and dangerous machinery. Now look at them.”

Scotland To Buy Second Hand Car With Own Money 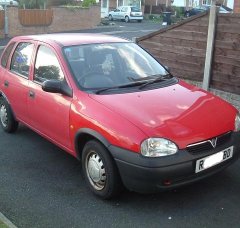 FIRST minister Alex Salmond will today announce that Scotland is to get a part-time job and save up enough money to buy a car.

Salmond will outline an 18-month strategy centred around bar work and shelf-stacking, but could even go as far as up to six hours a week at Greggs.

The bold initiative, which threatens to change the course of British history, will culminate in the purchase of a 1997 Vauxhall Corsa.

Salmond said: "Having a car will be totally brilliant. We could even drive to Italy or Spain next summer."

He said that it was natural for small European nations to have their own cars stressing that Ireland now has a five year-old Audi A3 while Estonia and Lithuania have recently bought Fiestas.

But political analyst Dr Wayne Hayes of Dundee University said: "Salmond may have grand plans for his Corsa, but in reality he'll spend most of his time sitting in the car park at Aldi and borrowing money for petrol."

Prime minister Gordon Brown, who drives a high-mileage BMW 5-series, warned Scotland that a part-time job and a car were serious responsibilities.

He added: "If Scotland is going to start earning money then its first priority should be the household bills.

"I don't see why I should be paying for Quorn sausages and forking out £15.99 a month for wireless broadband that I don't even bloody use."