CAN you remember the last time anyone mentioned Brexit? Despite the misery of coronavirus maybe it’s not all bad. Here are some more silver linings.

People finally give a shit about personal hygiene

If you’ve long despaired about people swanning out of the work toilets without washing their hands after taking a dump, despair no more. Now you have to get those hands nice and clean or be cast out of society like a modern-day leper.

You’ve proved to your boss you can work from home

Has your boss claimed for years that it’s not possible for you to work from home without giving a good reason? That’s because there isn’t one, and now they don’t have a leg to stand on when you fancy a day lolling around in your pyjamas.

Eurovision is never as hilarious as people say and the search for the UK’s song is unbearably tedious. The one we choose is invariably shit and no one gives us any points anyway because we’re the national equivalent of a petulant child. This year we’ll be spared the humiliation. See also: all sporting events.

Boris Johnson gets scrutinised on a daily basis

Before the crisis the prime minister appeared to be phoning it in whilst spending the majority of his time on holiday in Mustique. Now we’ve got a daily opportunity to watch him squirm awkwardly and look frankly terrified by his ‘dream job’.

We don’t have to hear about Brexit for a bit 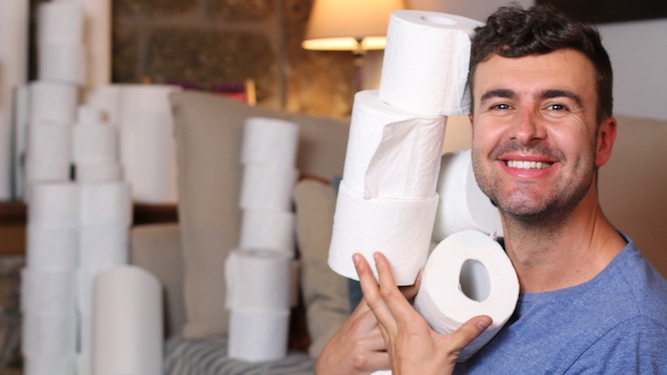 A MAN who spent his morning panic-buying toilet roll will spend his evening with a large group of regulars at his local.

Roy Hobbs began his unhelpful approach to the coronavirus crisis by deciding he needed a year’s supply of toilet paper, especially as it was a foreign disease and would therefore probably involve diarrhoea.

He then visited a packed supermarket and added eight packs of Andrex to the vast supply in his spare room. At 6pm, however, Hobbs decided that expecting him to hang around indoors was ridiculous and he was going to the pub.

Hobbs said: “We got through World War 2 by rolling out the barrel and having a singalong and we’ll get through this the same way.

“It’s that herd thing Boris was talking about. As long as we stick together in herds, we’ll be okay. It’ll all blow over anyway, these things always do. And they say alcohol’s the best way of getting rid of germs.”

Professor Henry Brubaker of the Institute for Studies said: “Mr Hobbs is what clinical psychologists refer to as ‘an absolute bellend’.”