CHILDREN who have only been back at school for two f**king weeks are already off sick, their parents have confirmed.

Despite social distancing and frequent hand-washing, children aged between five and 16 are coming home with colds, sore throats and vomiting bugs and passing them on to their families.

Mother of two Emma Bradford said: “It doesn’t seem five minutes since we were cracking the champage and celebrating our freedom. And now they’re back home and full of snot.

“We’ve got colds, we’ve got the squits, and apparently there’s an outbreak of threadworm in year three. It’s only a matter of time before there’s nits. Children are revolting.

“I’m not even worried about getting Covid now. I’m back to more mundane, everyday illness worries, like getting some bug that has me retching bile into the toilet until 4am.”

Dr Helen Archer said: “Despite all the education about virus transmission over the last year, it’s still possible for youngsters to pick up bugs by inhaling droplets coughed or sneezed into the air, or coming into contact with contaminated surfaces.

“Though let’s face it, it’s more likely they’ve picked up whatever horrible thing they’ve got because they’re dirty bastards who scratch their bums and don’t wash their hands.”

'We'll get you next time, Sturgeon!' shout puce-faced furious Tories 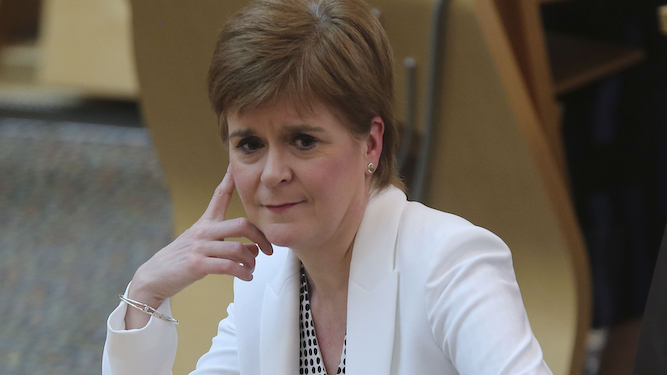 THE Scottish Conservatives are crimson with rage after wily Nicola Sturgeon once again escaped justice by ‘doing nothing wrong’.

Tories north of the border were sure they had got the first minister this time, after she was caught red-handed not inferfering with a government inquiry, but instead have been left sputtering and furious by her exoneration.

“How? How has she done it? We thought we had her for sure, after she forgot to mention a meeting with her old boss’s aide. How unfit for office can you get?

“Instead she’s somehow wriggled out of it and we’ve been left looking like fools, just because we pinned all our hopes of stopping the independence movement on a minor technicality.

“Oh, we’ll get you. Maybe you’ll be caught using official Holyrood pens to write personal letters, or shaking a vending machine to get haggis crisps out, but there’s a smoking gun out there. This isn’t over.”

He added: “Obviously we’ll crash and burn in the May elections, but who cares what the people think? It’s what the Tories want that matters.”