Get drunk in front of the telly: five ways to mark a year of lockdown

ONE year to the day since the government locked down the UK, here’s how to mark the occasion without lifting a finger:

Get drunk in front of the telly

It was already the country’s national pastime, but a year of forced confinement has made it official. Begin early like you did this time last year and get half-cut while watching Homes Under the Hammer. Having worn a groove into your sofa while knocking back Stellas for the last twelve months, you know how this works.

To remain true to the spirit of lockdown, make sure you order the most pointless and expensive piece of tat you can find. Could be a rare toy from your childhood that you’ll break instantly, could be a DVD boxset of a show that will drop on Netflix tomorrow. Either way, you’ll be treated to one of the enduring images of lockdown: excessive Amazon packaging.

Think about going for a walk

Going for a stroll around town and taking a wistful look at all the closed shops and anxious passers-by is one of the easiest ways to mark today. It’s even easier just to think about doing it, because you’ve seen the same sodding streets for months on end and can do it while getting drunk in front of the telly as above.

Remain silent for a minute

Not uttering a word for sixty seconds requires even less effort than clapping once a week. And if you live alone all it means is that you don’t tell Dion Dublin he’s your best mate in a slurred voice for a little while longer than usual. Don’t feel guilty if you get bored and start scrolling through social media halfway through. It’s been a long year.

Round off your day of solemn remembrance by ordering a takeaway that will be delivered by some poor soul you won’t even bother to tip. And because it’s a Tuesday you can get two Domino’s for the price of one. Did Boris Johnson time lockdown with this in mind? Probably. 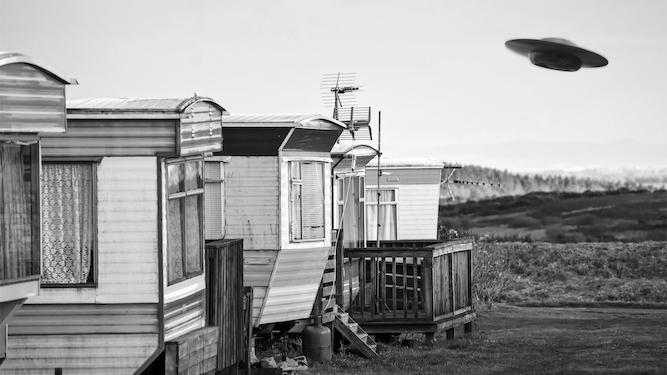 A FORMER US intelligence director has said there are more UFO sightings than people realise. These are the questions you need to ignore to believe in one:

Why are there never clear, multiple pictures of one?

In the 1950s, sure. But today, if UFOs are physical objects, one flying overhead would result in consistent pictures from hundreds of dashcams, doorbell cameras and smartphones. But no, UFO pictures are still blurry blobs that could be anything, including obvious fakes. What conclusion might a non-moron draw from this?

Why does every UFO account turn out to be dodgy in some way?

Betty and Barney Hill, Travis Walton, Rendlesham Forest – they all have a mundane explanation such as people being a bit strange or a lighthouse in the distance. The latest load of cock is the Tic Tac footage, promoted by respected scientist Tom DeLonge out of Blink 182.

Why are they always mutilating cattle?

By any measure aliens are travelling a unimaginable distance to f**k up our livestock. Instead of making the journey from Zeta Reticuli, why not just take some cows and breed them? Hey presto, a limitless supply of cows to dissect in laboratory conditions. The current policy is like doing your big shop one item per trip from Penzance Lidl.

What is the fascination with anuses? And why not slake your thirst for bumhole knowledge by just abducting a proctologist? Anuses aren’t exactly an undiscovered mystery. Though, like cattle, they are an enduring preoccupation of bored people in rural areas.

To get here, aliens must have access to Einsteinian physics-bending technology and vast energy sources, so the conquest of Earth would be like kicking over a sandcastle. Or if they mean no harm, why not just land and say so? All of which suggests they could just be tourists who decide they don’t like it, and go home early, like visiting Llandudno.

Betty and Barney Hill’s aliens looked like the ones from The Outer Limits. There was a wave of Grey-spotting after that obscure programme nobody’s has heard of, The X-Files. Just hope the next ones aren’t something shit off Doctor Who like the Judoon.