EVANGELISTS for the wonders of coffee have become even more intolerable after scientists confirmed it is good for your health.

News that three cups of coffee a day improves health has made men like Nathan Muir, a social media manager who mentions his £1,700 Jura bean-to-cup expresso machine once an hour, into supernovas of over-caffeinated self-righteousness.

“He’s been a wanker about coffee since the first day he called the cup of Nescafe he was offered ‘blasphemous’, but at least we had the comfort that his caffeine addiction was slowly poisoning him. Now even that’s gone.

“Can you imagine how morally superior his lectures are going to become now? These scientists are no better than the ones who’ve given nukes to Kim Jong-il.

“The worst thing is that I’ve been drinking green tea, which tastes like the boiled piss of the devil, because I thought it was good for me. So technically, I’m the twat.”

Muir said: “The Bean is the Way and the Life. Worship the Bean.”

If you're all so poor, how come the pubs are so bloody full? by Philip Hammond 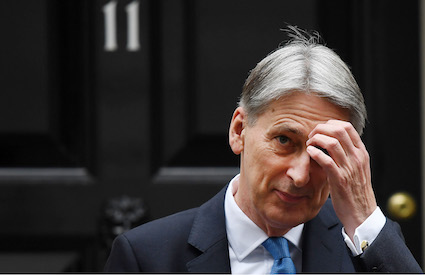 I HAD a dog’s arse of an afternoon the other day.

Delivering a Brexit budget to Britain means pretending to divide up money we don’t even have anyway far too thinly across a load of lost causes, and frankly the whole farce did me in.

Even as I took my last swig of grappa at the dispatch box, I could hear the whines across the nation about how the pathetic concessions I made were cold economic comfort in these desperate times.

I tell you, I needed a fucking drink. So I hooded up and padded across Whitehall to the nearest pub.

I couldn’t believe it. The queues were six deep. Chief among them the so-called young.

I saw wads waved, credit cards brandished – it was like something out of a 1980s episode of Only Fools And Horses, except it was me falling through the bar in sheer astonishment.

Seriously, are you people taking the piss about this so-called economic downturn? Because it seemed to me, unable to get a drink even after 15 minutes waiting, that you’ve got enough in your pockets to get wrecked on a Wednesday afternoon.

Tell you what, they should make you fuckers Chancellor. I can’t find the money anywhere to do anything. But you people magically pluck banknotes from the air to drink solidly from six till midnight. You’re walking bloody economic miracles.

Anyway, somewhere between last orders and getting into a fight with a minicab driver I seem to have lost my umbrella, phone and right shoe.

If you’ve got them, return them to 11, Downing Street. I’d offer you a cash reward but I’m maxed out from scraping every last penny in the pot to bribe people to vote Tory.