A NON-DRINKER’S most enjoyable sensory experience is a bowl of light brown soup, he has revealed.

Office worker Tom Logan’s dislike of alcohol, coupled with his lack of a sexual partner or interest in drugs, means his main source of pleasure is his favourite food, soup.

Logan said: “Obviously soup doesn’t give you a buzz like alcohol or help you get chatting to women. But that doesn’t really matter if you’re at home on your own.

“Soup has numerous advantages over alcohol, such as no hangovers or liver damage, although I’ve had to start hitting the gym after putting on some serious weight from the croutons.

“With all the money I’m saving I’ve started exploring fine soups like Waitrose Beef and Port. I’ve got quite a ‘soup cellar’.

“I did try going to the pub with friends and ordering soup instead of a pint, but people think you’re a weirdo and you feel pretty nauseous by the fifth or sixth round.

“I’ll definitely be sticking with soup though. My only concern is that I become incredibly tense and my hands start to shake if I go too long without a bowl.”

Cancer drug breakthrough prompts man to get back on the fags 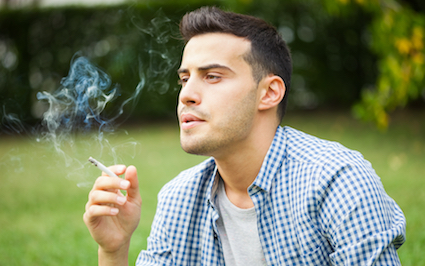 NEWS of a breakthrough cancer treatment has prompted a man to light his first cigarette of the year.

Tom Booker of Derby gave up smoking in December but is so thrilled by the news he has sworn to get back up to a pack a day.

He continued: “That kind of performance in a clinical trial absolutely deserves a tribute smoke.

“I’ve enjoyed not smoking – the other day, it was pissing it down and I just stayed in the pub – but it seems churlish for me to sit this out when they’re out there working so hard on my behalf.

“I’m sparking up this one for the boys in oncology. Thanks, lads. I’m sorry I ever lost faith in you.”

When told that the trial was still in very early stages, Booker vowed to personally boost funding for cancer research with the high tax on his tobacco.