AN inquiry has been launched into why it has taken a month to blame the horsemeat scandal on the French.

The French were finally blamed yesterday afternoon, bringing the issue to a close.

But now the government must explain why the French were not blamed as soon as it emerged that British people had been eating questionable mince.

In angry exchanges in the House of Commons, Labour’s Mary Creagh told food minister David Heath: “This is catastrophic complacency. At any time in the last four weeks you could just have said ‘it was the French’.

“No-one would have questioned it and we could all have congratulated ourselves and moved on.

“Instead you caused unnecessary anxiety which led to vile accusations being made against dozens of hard-working Romanian gangsters.”

A spokesman for the Supermarkets Association said: “We have perhaps been guilty of a lack of transparent blaming.

“We have now put in place a system which means that when you find out about the badger meat, we can blame a specific Frenchman within the first 20 minutes.”

Roy Hobbs, director of the British Society for Animal Mincing, said: “After we have minced stuff we shovel it into the back of a truck which then goes to the Dordogne.

“Tragically, they mix it with other minced things, because they are dirty bastards.”

Poverty linked to not having any money 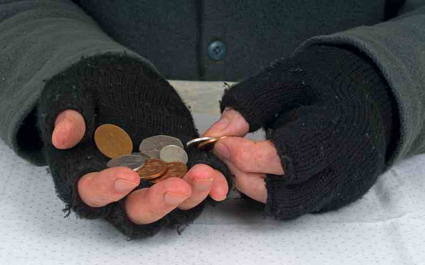 POVERTY may be caused by having little or no money, according to new research.

“We worked it out using a computer the size of a bus.”