It’s not a takeaway when we do it, say middle class people

THE middle classes have confirmed that they do not eat takeaways, even when buying food at an establishment and removing it to consume elsewhere.

Responding to concerns that the increase in fast food shops is fuelling an obesity epidemic, middle class people have explained that the Thai, Korean and street food outlets near them are different because they are fancier.

Museum curator Helen Archer said: “The news about these awful diets is so sad. I’m just glad it’s something that I’m able to avoid.

“I’m super busy so I’m always on Deliveroo – usually Szechuan, pan-Indian, or Five Guys – but it’s not really comparable, because when it arrives I put it on plates.

“It’s a simple matter of making healthy choices. Why let your children go to Pizza Hut when Pizza Express is available, and their pizzas have Italian names?

“I suppose there are surface similarities, but it’s like saying our summer travels around Moorish Andalucia are like a package holiday in Spain. Not the same thing at all.”

Archer also confirmed she has banned unhealthy crisps and fizzy pop from her home in favour of vegetable chips and smoothies which contain the exact same amount of salt and sugar but incur considerably less judgement. 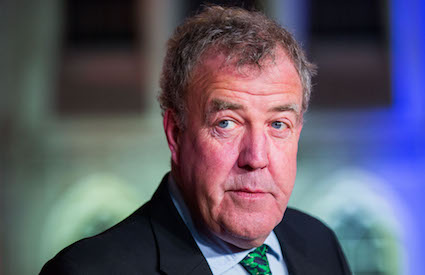 A WEEPING Jeremy Clarkson says he is only glad that he will not live to see the self-driving electric car dystopia that Britain will become.

The former Top Gear presenter, who now presents Motormouth Madness! on WeBuyAnyCar.com TV or might as well, believes the banning of petrol and diesel cars will mean the abandonment of the UK by 2042.

He continued: “The petrol car has been central to British life since Morris Minors won the battle of Agincourt in 1415.

“Imagine our cities without the comforting blue haze of exhausts, Stonehenge without the reassuring drone of traffic from the a dual carriageway. You can’t. They’re everything.

“I have never feared death because I knew that my cars, the best part of me, would live on long after me. But now they too face oblivion.

“Within two years of this ban this sceptred isle will be empty of humanity, our children fled, the only movement processions of self-driving electric Ubers around our magnificent road network. RIP Britain.”

Clarkson added: “It’s all my fault. This would never have happened if I hadn’t punched that producer.”