Legalise drugs, says some crazy President of the Royal College of Physicians

THE campaign to legalise drugs was today backed by someone whose only qualification is to know exactly what he is talking about.

Professor Sir Ian Gilmore, the outgoing president of the Royal College of Physicians, admitted he did not expect his views to be taken seriously because all he had done was spend 30 years becoming a world class consultant and public health expert, before sitting down and thinking about the issue of drug misuse for absolutely ages.

He said: “I haven’t done anything particularly onerous such as waiting my turn to be handed a safe parliamentary seat before confronting the incredibly demanding task of doing whatever the Daily Mail tells me to.

“My comments are nothing more than the sort of off-the-top-of-the-head ramblings one consistently hears from scientists, lawyers and hippy dippy chief constables.”

Professor Gilmore added: “The only people now opposing the legalisation of drugs – and thank goodness – are MPs, your grandmother and Peter Hitchens, that religious chap who is perilously close to being too insane for the Mail on Sunday.”

Senior Tory backbencher Denys Finch-Hatton, said: “I do find it disturbing when dangerously under-qualified people get involved in subjects on which the Daily Mail has already made its position perfectly clear.

“Take this quote from Professor Gilmore – ‘Everyone who has looked at this in a serious and sustained way concludes that the present policy of prohibition is not a success’.

“Not only is that pseudo-scientific rubbish, but if you re-arrange the letters and add some new ones it spells ‘I want to kill the Princess Royal and then make nasty love to your inside-out brain on a sponge made from death yoghurt’.”

He added: “I’m sorry, you’ll have to excuse me, I’ve had about 12 gin and tonics and a bottle of Muscadet.” 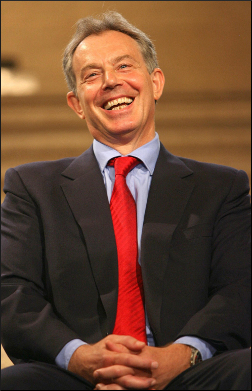 TONY BLAIR was today hailed as a role model for children who want to kill thousands of people when they grow up.

In a move described as both inspirational and typical, the former prime minister pledged the Â£4.6m advance from his novel to the victims of his shabby dishonesty and obsession with remote control violence.

Announcing his donation, Mr Blair said: “Young people need to learn that starting a war is only justifiable if you can also get someone to ghost-write a dreary book for you and then hand over all the cash you get from some fuckwit publisher.

“Leadership teaches us that as long as you are willing to donate a reasonable sum of money at some indeterminate point in the future then you are entitled to regard soldiers and the civilian populations they terrorise as little more than numbers on a page.”

And Mr Blair admitted that now he had finally sponged down his moral slate he was keen to return to high profile acts of unspeakable wickedness as soon as possible.

“I don’t have an army any more so I can’t just lay waste to some third world hell-hole and then say that Jesus made me do it.

“I suppose I could always just kick a duckling right in the face.”

The former PM also said his donation to the families of the tens of thousands of Iraqis that he killed over the phone had not yet been finalised, but would probably be in the region of precisely fuck all.