Man claiming he got pinged from nightclub, not game of Warhammer

A 31-YEAR-OLD pinged after playing Warhammer in the Warhammer shop has told everyone he actually visited a cool new nightclub.

Tom Logan denied that his ten days of self-isolation had any connection with a six-hour game of Warhammer 40,000 live before an audience of teenagers in a Wolverhampton town centre retailer.

He said: “Yeah, I told my boss that I’d been out clubbing Saturday, with my squad and my side chick, partying on the dance floor unmasked. She was disappointed but he understood.

“I definitely wasn’t scoring a massive win with my Chaos Space Marines which I’ve been carefully painting through lockdown. Rest assured I was at a club getting off with some hot ladies.

“What was it like? Absolutely buzzing. After this last year it felt like coming home, being there with my peers, all of us high on life. In the nightclub. Definitely in the nightclub.”

Boss Carolyn Ryan said: “Andy in Marketing saw him in there, standing over the table, high-fiving 12-year-olds. But still he’s telling us the DJ give him a rewind just so he could repeat his dancefloor heroics to Uptown Funk.

“Better he’s not in. None of us could look him in the eye.”

Six bullshit things to blame for your hangover 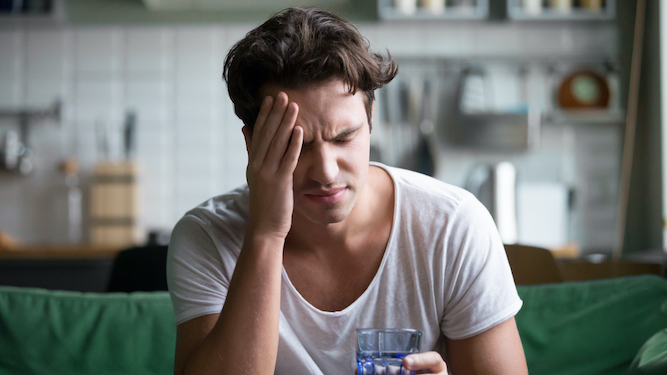 HANGOVER causes range from drinking too much to drinking far too much. So why not try these bullshit excuses instead?

It was a dodgy bottle

That third bottle of Shiraz had a screw top, so you can’t even claim it was corked, but there was definitely something odd about it. You didn’t mention the suspiciously bitter taste of the tannins when you were sloshing it into a pint glass last night, but that’s what you’re blaming today.

You drank from a dirty glass

Feeling like someone is repeatedly stabbing you in the temple with a screwdriver this morning is down to a glass not being hygienically washed at the bar you went to. Or maybe they didn’t flush the lines properly and you drank some caustic soda. It’s definitely not the seven rounds of shots you insisted on. No way.

It was something you ate

Vomiting and shaking are the main symptoms of food poisoning. It must have been something in the simple vegetarian meal you ate yesterday evening that’s causing it, rather than the massive night in a club necking black sambuca.

It was something you didn’t eat

Feeling shit after a long session in the pub? Blame the fact that you didn’t line your stomach beforehand with a glass of milk and a slice of toast. It’s a bollocks old wives tale of course, but it will make you feel less like a semi-alcoholic waster.

You had wine before beer

Everyone knows what ‘Wine before beer, something to fear’ is a scientific fact rather than just a bullshit rhyme. Having two bottles of Merlot before switching to pints of Stella is why you feel like a badger crapped in your mouth today, and not because you imbibed enough alcohol to sink a small boat.