'A damp squid' and other phrases people mangle horribly

THE English language is complex so it’s easy to make mistakes. But these mangled phrases are never acceptable:

It’s bad enough that no one has shown up to your 30th birthday party, but to make matters worse you’ve described the event as a ‘damp squid’. Cephalopods have nothing to do with the fact that you can’t make any friends, and the word you’re looking for is ‘squib’, a type of firework that doesn’t go bang when wet.

A swing and a miss for the term ‘scapegoat’, which you’ve just embarrassingly used in a heated meeting at work whilst being blamed for the entire sales team underperforming. Expect to see ‘can’t use basic English’ written on the reference for the next job you’ll be looking for soon.

A valiant effort at carpe diem, which you struggle with because it’s in a different language, perhaps French or Dutch. You know it means you should enjoy life and have adventures, but you’re still perplexed as you’ve heard it translates as ‘seizure day’ which doesn’t sound like much fun.

Bite your nose to cut your face

Wrong on every conceivable level, this horribly mangled version of ‘cutting off your nose to spite your face’ requires a lot of mental gymnastics to even attempt to decode. By the time the person you’re talking to has registered what you’ve just said, they’ve also registered you are a halfwit.

The correct phrase is ‘in layman’s terms’, which means to explain in a way that is free of obscure technical words. This means that for your whole life you have been telling people you’re going to explain something to them slowly and clearly because they’re so f**king lame. You’re an idiot.

Eric Clapton, and other celebrities who have gone full gammon thanks to Covid 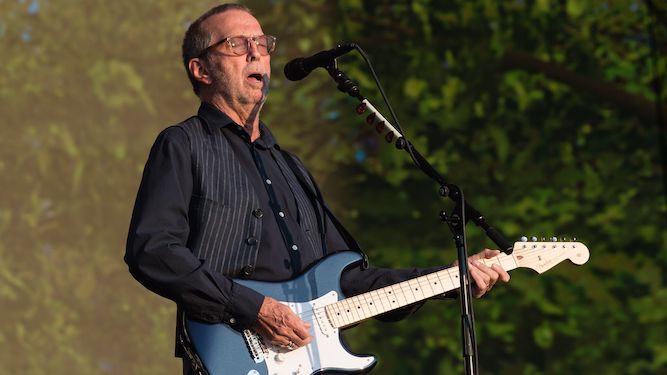 WHILE Covid has made heroes of some, it’s forced several celebrities into becoming raving lunatics. Here are the worst:

The guitar-noodling lockdown sceptic recently said that he won’t perform in venues where people require proof of vaccination to attend. Given that those will be the rules he’d better enjoy playing concerts to silence – which, given the ageing audience still interested in seeing him perform live he’s probably used to.

Northern Ireland’s most famous fedora-wearer has become perhaps the defining anti-lockdown artist. Having long had a reputation as a grumpy prick, his decision to release an entire album of dreary anti-lockdown songs has elevated him to being a weapons-grade bellend.

Throughout lockdown the part-time actor and full-time arsehole has really entered his own league of twattery. From his nonsensical bid to become the Mayor of London to slagging off the NHS, he has been the gammon gift that keeps on giving if that gift is a box full of idiotic opinions designed purely to antagonise.

Having made a career from writing songs with utterly meaningless lyrics, it should come as no surprise that he has gone on several equally incoherent tirades about mask-wearing. Noel should be well aware that if more people agree with Liam Gallagher on a subject than with you, your opinions are deeply flawed and terminally shameful.

The former Stone Roses singer’s staunch opposition to vaccines comes as something of a surprise given he spent the majority of the late 80s and 90s pumping his body full of suspect chemicals. His decision to cancel performances where vaccines are required should be seen as a relief to anyone who’s pretended to enjoy any album he’s released since Second Coming.