NHS To Replace Homeopathy With Medicine

THE NHS is to replace homeopathy with medicine after realising that a wet tea bag applied to the buttocks will not cure cancer. While this teabag cannot perform keyhole surgery on a ruptured spleen, it does make a nice cup of tea

The homeopathic system was invented in the late 18th century by a German who discovered that sick people would pay to be treated with a mixture of ground-up pubes and lice.

Despite the invention of medicine, the remedies are still used by some people today, up to the point where they discover they actually have something wrong with them and demand proper drugs and an operation.

Henry Brubaker, director of the Institute for Studies, said no one had suffered adverse effects from using modern homeopathic tablets, which contain a mixture of humus and magic air.

He said: “The only people to wind up dead after taking these tablets were already ill. They are perfectly harmless, as long as they are not taken by sick people.”

Bob McKay, 56, said: “I have taken homeopathic remedies all my life so as soon as I started shitting blood I treated it with a tincture of black puddings.

He added: “Are you coming to my funeral next week? My wife needs to know for the sandwiches.”

Nikki Hollis, 26, said: “I used homeopathy to ease the pain of childbirth. If my husband ever comes near me again I'll chop his cock off with a rusty tin lid.” 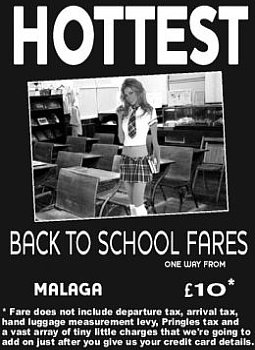 This sort of thing should not be published

Offwrist, the Office for Wanking, Rubbing and Independent Sexual Techniques, said the images would encourage men to think about grown women in short skirts in an inappropriate way.

"A model in her mid-twenties wearing a teeny, tiny little skirt, a tight top and showing a mouth-wateringly tantalising degree of midriff is not an appropriate image for frenzied sexual daydreaming.

"Parliament has given us the statutory responsibility to control the supply of masturbatory stimulants.

"The last thing we need is this scorching hot woman staring out at me all day, telling me she wants me and urging me to abuse myself. Just look at that skirt, I mean Jesus Christ."

He added: "Thank god she wasn't sucking on a pencil because, quite frankly, I wouldn't have time for this interview."

Julian Cook, of the Consumers Association, said: "Perhaps the next Ryanair advert could show a picture of a dilligent schoolboy trying to work out why the advert said a flight to Barcelona would cost £7.50, but he's actually been charged ten times that."