Property Value More Important Than My Kids, Say 92% Of Homeowners

HOMEOWNERS in the UK are more interested in the value of their house than in the fate of their own children, according to a new survey.

With banks, building societies and the police now warning of a market slowdown, homeowners say they are willing to do whatever it takes to maintain the equity on their house.

A survey by the Motherwell and Berkshire Building Society found that 55% of people would rather install double glazing or fit a designer bidet than take their children on holiday.

And more than three-quarters said that if a convicted paedophile moved into their area they would volunteer to kill him, but only if it threatened the value of their house.

Marian Billington, 41, from Swindon, said: "If I thought that selling my children to the Russian  mafia would increase the value of my three bed, two bath semi, I'd be booking flights to Moscow.

"What's the point of putting aside money for a private education or university fees when I could be installing an ensuite, a waste disposal and some decking?"

Meanwhile political analysts are warning of the electoral damage that would be caused by a house price collapse.

Professor Sir Roy Hobbs of the London School of Economics said: "Gordon Brown would shit his pants so loudly that the people in the next room would think the oven had exploded."

Mrs Billington added: "A woman two doors down from us told me her kids were the most important thing in the world. What a fucking moron." 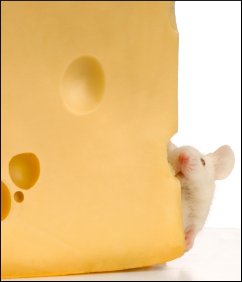 SCIENTISTS have combined a mouse with a giant ear on its back and a mouse with spider’s legs to produce a small, cute creature with an inordinate fondness for cheese.

Dr Wayne Hayes, a geneticist at Dundee University, said it was the first time researchers had produced a mouse without major physical or mental deformities under laboratory conditions.

Dr Hayes said: “We have mice here with giant Kenny Everett hands, we have one that likes to wear panties even though it is a man mouse, and we even have one which has the face of Groucho Marx, although it lacks his sense of comic timing.

“However, this is the first time, as far as we are aware, that anyone working in a British university has managed to produce a mouse of normal proportions that sits around washing its whiskers and nibbling cheddar. It’s amazing.”

Dr Hayes said the mouse’s behaviour would now be studied as the team sought to get to grips with why it was that cheese was so attractive to humans. “We think it might have something to do with the taste, but in science you can’t just rely on a hunch,” he added.

He said the mouse had been discovered by accident after his team had attempted to manufacture one capable of producing an accurate weather forecast and playing roulette.