RIZLA cigarette papers are to carry warnings that excessive cannabis smoking makes you incredibly boring and likely to bore others around you.

The warnings follow new research into the dangers of so-called 'passive tedium' which show that people exposed to cannabis smokers are often incredibly bored by the experience.

Professor Henry Brubaker, of the Institute for Studies, said: "You may think that your incoherent theories about the nature of music are interesting. But the fact is, they are unbelievably boring and you have to shut up."

He added: "The danger is other people become so bored they start to throw up and before you know it you have to make yourself look interesting by growing dreadlocks.

"It's about as cutting edge and rebellious as my Gran. Reggae? Thump, thump, thump. Batty boys, Mr Bombastic. What a lot of pish."

A series of warnings will be printed on each individual Rizla paper including:

He added: "We're urging moderation. There's no need to roll a really fat one first thing in the morning, unless you have a stressful job like driving a train." 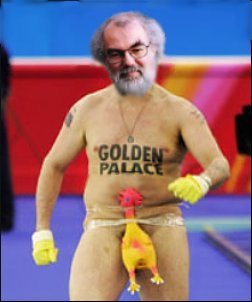 THE Church of England was under temporary management last night after the Archbishop of Canterbury lost his mind during an interview with the BBC.

The Right Reverend Rowan Williams surprised colleagues when half way through the recording he stripped down to his underpants and spread his legs so wide that each one was draped over an arm of the chair.

Britain's most senior clergyman then pointed to his groin, nodding slowly, before claiming that Jesus was a hefty, black woman and challenging everyone in the room to punch him in the stomach.

Holding his hand over a burning candle, the Archbishop said: "The thing about me, right, is that I'm always pushing the outside of the envelope. I'm always challenging pre-conceived ideas.

"You say Jesus was a thirty-something Jewish guy with a beard. That's fine, but I'm saying he was an 18 stone woman from Harlem. Are you saying I'm wrong? Do you want wrestle me? Is that what's going on here?"

"You want to make women dress up in big sacks, that's cool. You want to chop off a few hands, stone a few gayboys. That's your bag and I'm down with it."

He then grabbed the BBC reporter by the lapels and said: "Are you afraid to get naked with me boy?"

The Archbishop then ran from the room, removing his underpants and shouting: "Look at it! Look at my dancing penis!"

Reverend Williams was later spotted running into woodland near Gravesend where he is believed to have spent the night.