Romantic wild swim ends in severe bout of the shits

A COUPLE who thought it would be romantic to swim naked in a tranquil river have ended up with a nasty dose of diarrhoea and some tetanus booster jabs.

Donna Sheridan and Nathan Muir were out for a lovely walk in the country when they decided to throw their clothes off and dive in, despite having seen a dead sheep in the water a few hundred metres upstream.

Sheridan said: “Even though we live a contemporary urban lifestyle, we still love to commune with nature whenever we get a chance, as long as it doesn’t involve cows because they’re scary.

“So the swim seemed like the perfect way to reconnect with Mother Earth. It was fucking freezing and covered in weird scum, but we coped with that until Nathan cut his leg on a rusty shopping trolley that was lurking unseen under the water.

“Then a farmer walked by and said we’d better get out if we didn’t want Weil’s disease, and offered us a lift to A&E when he saw Nathan’s leg. We waited for four hours to be seen by which time I had the chronic shits, probably from E.coli. 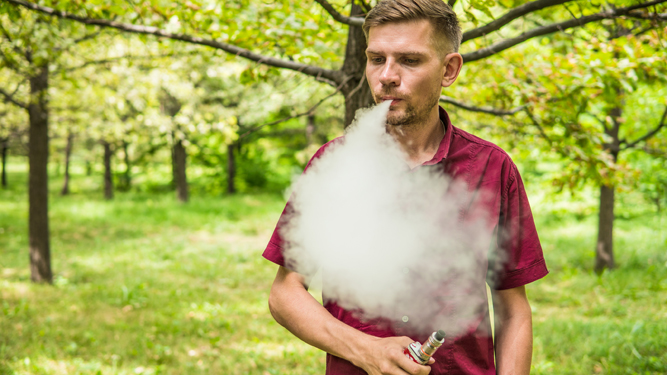 A VAPE user doesn’t believe that inhaling gallons of flavoured nicotine mist might be somehow be unhealthy.

He said: “What could be more healthy than constantly inhaling huge clouds of sweet-smelling chemical mist laced with nicotine? Surely that’s as natural as eating vegetables or going for a walk in a meadow.

“Vaping is the reason humans evolved to have lungs. At least that’s what Kev in my local vape shop reckons and he seems to know about science because he’s got a massive vape that looks like a gun from a sci-fi film.”

Vape fluid manufacturer Norman Steele said: “People get paranoid but ours is a trustworthy, long-running family business that also makes grenades and anaesthetics for donkeys.”