The miracles that could still save 2020

SO far, the end-of-year montage for 2020 is going to be you sat at home watching other people sat in their homes. But could these miracles turn the year around?

We find a vaccine tomorrow

Poof, just like that we’re back to normal. Sure, we’ll have to figure out how to vaccinate the whole planet, but we can sweat the details later. Unless Trump patents the cure in which case we’re all doomed.

The environment fixes itself

Forget about future generations and the animal kingdom; just think how happy this will make Sir David Attenborough. Plus he won’t have to end each episode of his next documentary on a downer that puts you off watching it.

Imagine how amazing it would be if we all got along, ie stopped bombing Middle Eastern countries on a bit of a whim. Naturally some nutjobs will bang on about how terrible it is for the economy, but why listen?

God comes out as real, apologises for all the many errors he’s made over the years and gives everyone a clean slate, a fresh start and a chance to live a better life. Of course nobody will make it through the day without at least one mortal sin, but for a few hours what a weight off your mind.

You wake up and President Palmer, a sober, sensible and popular leader, is leading the pandemic fight on TV. Suggestions that Donald Trump was ever president are met with incredulous laughter. Former MP Boris Johnson presents a teatime game show called Quo Est Simia? and is married to Billie Piper. 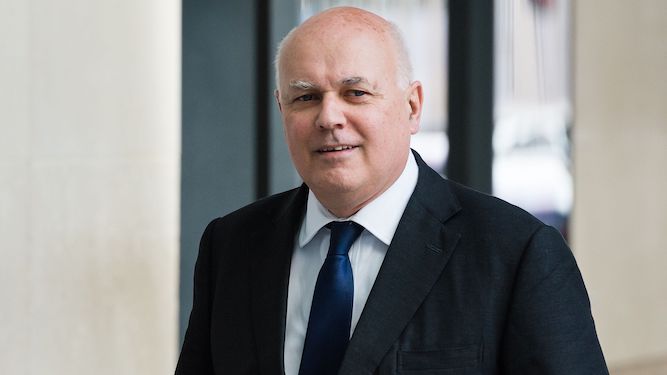 THE bookshelf of Sir Iain Duncan Smith has a full run of British pornographic magazine Fiesta hand-bound in leather, photos have confirmed.

The former Conservative leader and samurai was interviewed for ITN in front of a bookshelf proudly displaying the bound volumes, which constitute a full run of the magazine since 1966.

He said: “Yes, I’ve got them all. I think of it more as a historical archive than a collection. I’m planning to leave it to the Bodleian Library.

“My interest began as a young man – and I still have the copy I found in a hedge in our country estate, tattered and torn as it was – and only burgeoned once I realised how central Fiesta is to our culture. Did you know they invented Readers’ Wives?

“I’ve hunted them down over the years, finally completed the set, and had them bound in calfskin for the library here at our 17th-century Buckinghamshire manor house.

“Many’s the evening I put on my white cotton gloves and have a flick through them. A bit better than the Gove’s pretentious political bookshelves, isn’t it?”

A stung Michael Gove countered by claiming he has a framed canvas-effect print of a seminal 1988 Razzle stack over the fireplace in his drawing room.