Wedgies, and other school experiences far more traumatic than wearing a mask

THE usual knobheads are desperately worried about compulsory masks at secondary school. These educational experiences are way worse:

Do adults honestly think a 13-year-old gives a toss about wearing a cloth on their face when they’re used to having cloth forcefully wedged up between their buttocks? Secondary school is a harsh, hostile environment of forcefully-expressed loathing, even more so than anti-vaxx Twitter.

Aside from the brown crunchy cake with the pink custard, all school dinners are unremittingly vile. If young people can become hardened to eating that shit day after day for years of their lives, they can cope with wearing a mask in the classroom.

Getting chased down a rugby pitch by post-pubertal psychopaths intent on breaking a limb. Playing hockey on a surface harder than diamonds which will rip the flesh from your bones. Throwing javelins with uncoordinated hormonal idiots. Physical education is a theatre of pain that should be banned long before face coverings are.

Being sent to live in a village in Correze with a sulky girl who abhors you, when you can only ask for directions to the bakery and not understand the answer, is scarring. As is nearly getting arrested by a gendarme after shoplifting a bottle of Martini from a supermarché. A mask isn’t.

Though in theory fun, all non-uniform day does is offer the most vicious bullies – pupils or teacher – six hours to ridicule their peers mercilessly for some perceived sartorial mistake, like pink socks. If teenagers can cope with that, they can cope with masks. At least masks hide acne.

Tits for no reason: the essential features of every 80s film 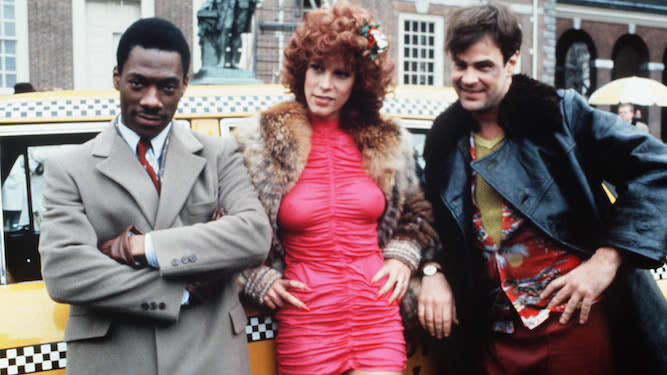 EVERYONE loves 80s movies for their neon palette and banging synthesised soundtracks. But rewatching them reveals other key elements which are bizarre:

Nudity has its place in films. In the 1970s they were crazy for it. But only in the 80s were otherwise innocuous scenes suddenly interrupted by a random pair of tits. Why? Was it a contractual obligation? And shouldn’t they warn you when you’ve put this on to watch with the kids?

Not peril for the characters like powerful monsters or rising plot stakes, but stunts that cause injury and practical effects so temperamental they could obliterate a town in minutes. When 80s actors are running with terror on their faces, it’s genuine.

Changing attitudes will always create some cringe-worthy moments in older movies. But the 80s specialised in making their racism absolutely unhinged. Movies from this era will offend in ways you didn’t think were possible. All Libyans are terrorists, right?

Whatever was going on in the 1980s, people were obsessed with nerds and geeks. Approaching a slow moment in the story? No problem, bring in a couple of guys in glasses with their top buttons done up to get things moving again. Cast Asian characters in these roles for weird racism as above.

Slang nobody ever said

Everyone and their dog is smoking

We get it, the stop smoking campaigns hadn’t fully taken effect yet. Having said that, from a logistical standpoint, surely every character didn’t have to smoke quite that much. The world could be saved a lot faster if the hero didn’t have to light a gasper every five minutes.