A YOGA mat has celebrated its fifth anniversary of being bought then stuck immediately behind the sofa.

Donna Sheridan of Shrewsbury bought the mat in 2012 after reading that yoga calms the mind and connects you to thousands of years of spiritual tradition while also targeting bikini trouble zones.

She said: “I liked the sound of becoming centred and hot, and the mat was on offer on Amazon so it seemed as if it was meant to be.

“But then my trip to Tenerife came round so fast I hadn’t had time to start my new regime, and actually I was too off my face on cocktails to care how my arse looked anyway.

“For the first year I felt guilty, but the more time goes by, the more inner peace I feel about not using it. I don’t need to be a slave to my material possessions. In a way, not doing yoga has been quite yogic.”

Sheridan added: “But I’m not getting rid of it. You never know, I might still start doing yoga.” 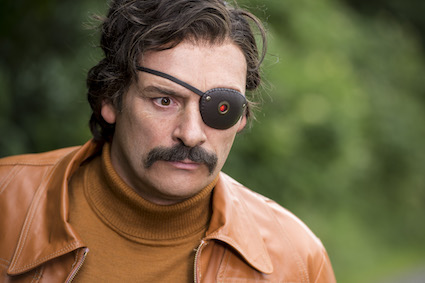 POLICE are attempting to catch a dangerous criminal with the help of a fictional detective from a 1980s TV show, they have revealed.

Actor Richard Thorncroft is reprising his role from the series Mindhorn to help an investigation by using TV cop techniques such as rolling across the bonnets of cars and making quips.

Thorncroft said: “The real police can learn a lot from TV cops like Bruce Mindhorn because they always get results thanks to not playing by the rules.

“I’m aiding the investigation with tried-and-tested maverick cop skills such as disrespecting authority, being irresistible to women and making a string of hilarious wisecracks.

“Sometimes painstaking detective work and the latest forensic techniques are no substitute for driving a Jaguar XJS really fast with a serious look on your face.

“Obviously I don’t actually have a bionic eye that lets me read minds like Mindhorn, but because I’m so deeply immersed in the character I’m able to literally see the truth just like he would.

“It’s hard to find the time to help as my schedule is jam-packed. I’ve been very busy, a lot of it off-piste, but very busy, like in the provinces with Edward Albee’s The Goat.

“And also an ad for Thrombie socks. It was by a big director actually and I believe there are no small parts, just small actors. But I’m happy to take a break to assist the police.”

Detective inspector Norman Steele said: “Thorncroft is helping with techniques normally considered too risky by the real police, such as playing mind games with a deranged killer.

“Inspired by his example we’ve decided to adopt a number of TV cop practices. From now on all our officers will be required to have their own catchphrase, such as ‘It’s truth time!’

“We will also be issuing them with distinctive sports cars, as it appears criminals never get wise to that.

“Most importantly we’re making it standard procedure to bring in 80s TV cops on all criminal investigations, whether it’s Jim Bergerac, Inspector Morse or Dempsey and Makepeace.”

Thorncroft added: “Mindhorn changed the face of detective shows on TV. Having him back is a great honour for everyone.”

Brought to you by

Mindhorn is on general release from May 5th