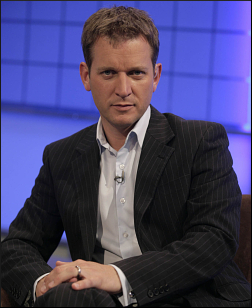 MY new prime-time show, Jeremy Kyle Tells You To Shut It, airs tonight, and the first episode is an absolute corker. A woman who'd lost her entire family in a multiple car wreck was sitting in the chair, moaning and groaning about her lot in life, which I know was pissing the audience off no end. So I hit her over the head with my rolled-up script. "Listen sweet tits, you're not the only one who's feeling pain, you're not the only one who's lost all 17 members of their family in a road traffic accident – well maybe you are, but you're a freak – I want you to buck your ideas up, go home, open a couple of bottles of Chardonnay and drink until you forget about this whole, sorry episode. Now Bugger off and take your snot-filled tissues with you." That seemed to do the trick.

I walked into my local Tesco Express in the hope that I could find some Alphabetti Spaghetti to go with the Findus Crispy Pancakes, the other day. Following a detailed yet fruitless search, I approached one of the checkout girls.  "I came in here to purchase a tin of spaghetti for my tea, and guess what? Nothing.  You've let me down, you've let all these people down – and more importantly – you've let yourself down. I think everyone in this lengthening queue will agree when I say that you're a total and utter disgrace. Okay, if you’re going to cry, then please do it in your own time, at the back of the shop." At that I walked out of there to the sound of cheering from the people queued up inside – it's hard being the people's champion, but somebody's go to do it.

I had to take my car into be serviced the other day, which is always a bit of a bugger because I have to use public transport which I find to be infested with various forms of pond life. There I was, on the top deck of the number 38 when I became aware of this couple arguing in front of me. I felt a responsibility to intervene.

"Excuse me, Jason and Denise, I couldn't help but overhear your conversation. Now, because you both have a somewhat limited vocabulary, I didn't quite get the jist of everything you said, but I can, from the cheap jewellry, fake casual attire and the fact that you're both smoking in a prohibited area, summise that you are the worst kind of scum. However, I won't let that cloud my judgement of you both. Now to the matter in hand, so to speak – Jason, if you can do me a favour and go to the back of the bus and fill this up with a sample of your semen, we can do a DNA test to see if the baby is, in fact yours.

Protein shakes aren't as bad as they seem, and let's face it I needed to lose some weight! So people, there is an upside to almost everything in life – even having your jaw broken in twelve places.