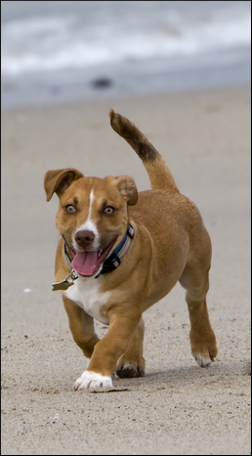 WORKERS at a Tesco superstore watched as a dog had a huge shit in the middle of their car park.

The animal, which was about a year old, squatted down and then shuffled along a bit, depositing its faeces behind it.

Staff, who nicknamed the dog “shitter”, said they watched it closely as the dog did the shit.

Nikki Hollis, 26, a check-out assistant said: “I was on my break when Darren from the fish counter said he could see a dog taking a shit. So we went to have a look.”

Bill McKay, 56, a trolley collector, said: “I saw a bit of a crowd gathering so I went over, I asked Nikki what was going on and she said it was a dog, taking a shit.”

Store manager Wayne Hayes, 42, said: “I was in my office when I got a call from Ellen, the checkout supervisor who just said ‘get yourself down here now, a dog is having a shit’”.

Bakery worker Norman Steele, 34, was walking towards the store to start his shift when he got a text from Mr McKay saying “Where r u? Dog having shit. Gr8!”

A spokesman for Tesco said: “Our staff are trained to expect the unexpected. As soon as the dog had finished they wrapped the shit in a blanket and called the RSPCA.”