VACCINATING everyone against mental illness is the easiest and most practical way to prevent mass shootings, according to America’s gun lobby.

The National Rifle Association has called for a nationwide inoculation programme to ‘eradicate violent psychosis from American life’.

An NRA spokesman said: “Most supermarkets sell a cheap, over-the-counter anti-madness serum that you and your family could inject yourselves with at home.

“But liberals won’t let you because they are all in the pocket of Big Insanity.

He added: “Just think, once everyone has been vaccinated then we could all have our own personal Howitzers, safe in the knowledge that we are all completely sane.”

Tories' London mayor candidate is statue of man on horse 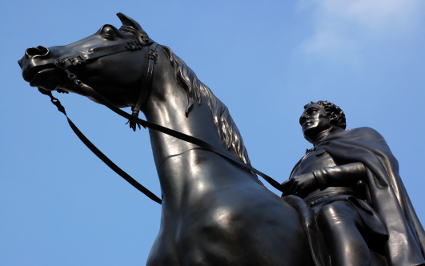 THE Conservatives have chosen a statue of the Duke of Wellington riding a horse as their candidate for Mayor of London.

The statue, which stands outside the Bank of England, was chosen because of its aristocratic bearing, equestrian ability, and total disinterest in ordinary Londoners.

A Conservative spokesman said: “We auditioned lots of millionaires but they didn’t quite have that aura of purebred contempt.

“Finally I was outside the Bank, desperately trying to find someone so posh they wore a top hat to work, when I saw the statue.

“Look at him. London is the last thing on his mind. He has other battles to fight. Just like Boris.

“But unlike Boris, he’s made of solid bronze rather than being completely full of shit.”

The statue is currently neck and neck with Labour’s Sadiq Khan in the polls, but should pull ahead once the Evening Standard attacks Khan for never defeating Napoleon.