Brexit talks to go ahead without us

MONDAY’S talks with the EU will go ahead without British involvement because what could be more Brexit, the government has confirmed.

The talks on exactly how Britain will exit the EU begin in Brussels on Monday, but the UK has yet to submit its opening position in writing and has asked negotiator Michel Barnier if he can get going in our absence.

Brexit minister David Davis said: “Do we really need to be there? Doesn’t it send more of a statement if we’re not?

“Imagine how idiotic they’ll feel spouting all their legal nonsense in their foreign languages to an empty chair. Meanwhile I’m at home eating bangers and mash while looking at an oil painting of a Spitfire.

“We’ll probably stroll in after three months, once they’ve got all the technical stuff out of their systems, and thrash it all out in four hours down the pub. After all it’s hardly complicated.”

Barnier said: “To miss these negotiations would be arrogant, absurd and ultimately hugely detrimental to the future of the UK. 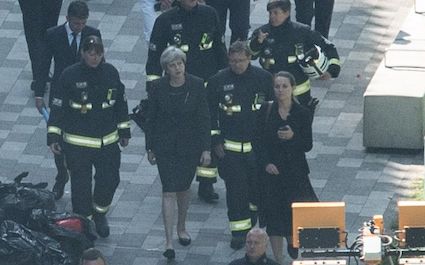 THERESA May has explained that she could not speak to residents of Grenfell Tower because she is feeling insecure and vulnerable right now.

The prime minister visited the site but did not speak to locals because she could not trust herself not to get upset after the week she has had.

She continued: “It’s been just so terrible. I could have lost my house, my job…

“Even before the election I wasn’t sleeping, and even when I do close my eyes I just see Corbyn’s face.

“Everyone loves bloody Corbyn don’t they? Just because he does eye contact and that thing of putting his arm around them.

“I don’t mind talking to people, it’s just when they talk back, and then you can’t control it.

“Apparently they call it ‘interaction’ and frankly I can’t handle it.”