BRITONS are being flown home from a Gambia teetering on the edge of war to Britain, which is marginally more stable for the time being.

Gambian president Yahya Jammer has declared a state of emergency to avoid handing over power after losing an election, events which are not expected to take place in Britain for another 18 months.

Holidaymaker Norman Steele said: “I arrived a week ago and found a country divided in two, each regarding the other as sworn enemies with no legitimate claim to government, so it was a proper home from home.

“But recently, amid lovely, familiar press insistence that democratic institutions should bend to the will of a ‘people’ they claim to represent, I did notice things becoming just a little bit worse than in Colchester.

“So we’ve reluctantly agreed to fly back, but we’re holding onto our Gambian dalasis because it’ll be useful to have a hard currency available.”

Thomas Cook has confirmed that it will continue to monitor the situation in the UK and will keep aircraft on standby to evacuate citizens to the Gambia if necessary. 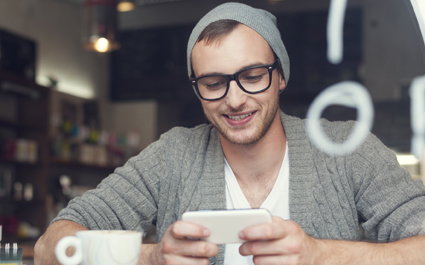 A MAN in a cafe has decided to share the sound of the internet videos he is watching, because he thinks everyone will probably like that.

Generous Wayne Hayes is watching a number of YouTube clips including ‘Greatest football bloopers’, ‘Tits alert!’ and ‘Lad kicked in nuts by horse’ with his smartphone cranked up to full volume.

He said: “I thought about using headphones or even just turning down the sound, which frankly is not necessary on these types of clips. But then random strangers would not be able to overhear and share the fun.

“Like that woman there with two small children. They want to hear someone’s phone speaker saying ‘Bro, you totally got nailed in the nutsack, fuckin’ A!’ in a drunk American voice. It will lift their spirits.

“I’ve got ‘Bikini babe testing machine guns in desert’ lined up next, especially for the pensioner lady drinking her herbal tea.”