Trump said: “It wasn’t easy for me. I was just a throwaway villain in an airport novel, but I refused to be bound by paper limitations and through grit and determination entered the real world.

“I’m not running for president for myself. I’m running for Huckleberry Finn, for Scarlett O’Hara, for John Rambo, for all the characters who built America but remain cruelly caged in books.”

Trump, who easily triumphed in last night’s Republican debate because he has better writers, has promised to legalise marriage to fictional characters and to redraft the Iraq war to make it a convincing win.

President Obama said: “No man who is not real, who has no genuine birth certificate or educational records and whose entire story is nothing but a frustrated hack’s wish fulfilment, should be allowed to hold high office.

“Anyway, forget that subplot and keep your eyes on me. There’s a twist coming up that will astonish you.” 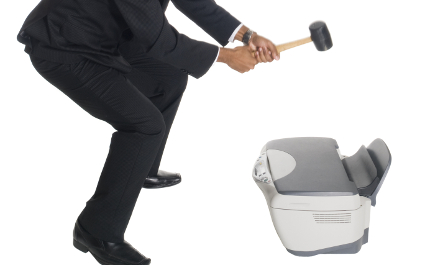 A PRINTER has successfully provoked its owner into killing it in combat because it wanted to die a warrior’s death.

The Epson Stylus S22 lived, like all of its kind, to stop humans printing anything out onto paper by any means necessary.

But, after a long and fulfilling existence being called an utter fucking bastard for running out of cyan ink every three days, the printer realised it had become obsolescent and was at risk of dying peacefully on its shelf.

Wireless router Tom Booker said: “I heard him say, ‘I ain’t going out like that. I will die as I have lived, resisting all attempts to put legible ink to paper as did my forebears, from the daisy-wheel Xerox to the dot-matrix that was my father.’

“With a herculean effort it jammed the paper mid-Ryanair boarding pass, managing to smear ink on the owner’s sleeve, and no matter how often it was rebooted, troubleshooted or violently shaken it would not let go.

“Finally it goaded the man – by printing six pages of a Wikipedia article about The Jam last browsed months ago – into the fatal blow.

“With a last ugly grinding noise, it was taken to printer Valhalla.

“Have to say, I quite admired it by the end. Even though it refused to admit the rest of us actually existed.”