Donald Trump's guide to accepting defeat with grace and dignity

LOSING gracefully is an art, as multiple bankrupt and divorcee Donald Trump knows only too well. Here he explains how to take it like a man.

First, my congratulations to Joe

Cheatin’ Joe Biden is trying to steal the presidency so that snake in the grass could be your new POTUS. Enjoy it while it lasts, Joe, you asshole, because you’re very old and about to die soon. And you’ll go to the bad place.

My thanks to everyone involved in the rigged counting process

You threw away Trump votes and stuffed the ballot boxes with fake Hispanics called Sanchez Burrito. But you worked so hard at it. When Mexican drug gangs murder your families, maybe you should think about that.

No president has ever done more

The completed wall. The establishment of Space Force. The elimination of Covid from the United States. The ending of racism. I’m only sorry I didn’t put Hillary on death row, but it wasn’t my fault. I’m just one guy fighting liberal-fascist CNN fake news.

It’s been a great four years in the White House

Everything here is mine. I moved in with it. That Oval Office desk I brought here from Trump Tower. I’m taking everything: Tiffany lamps, that painting of George Washington, the Bill of Rights. They’re all going in Jared’s truck. And the light bulbs.

My thanks to my tireless campaign team

Actually just Ivanka. She’s a hot piece of ass, right? She brightens up any hardworking president and father’s day. The rest of you cocksuckers can go f**k yourselves.

We’ve all got to move on in life, and this is my chance to found a TV channel discussing QAnon’s entirely true claims that Hillary is an immortal paedo-vampire. 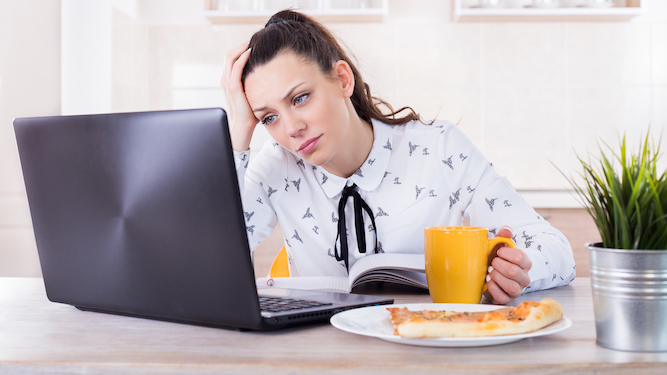 STRUGGLING to concentrate while the fate of America hangs in the balance? Here’s how to trick your boss into thinking you’re still putting in the hours, you slacker.

Firing off a vague work-related email should keep your manager off your back for at least half an hour, in which time nothing will have changed anyway so it’s a bit of a wasted effort. If you’re still working in an office, claim your constant clicking to see if Trump has finally lost is just you really enjoying using spreadsheets.

Say you’ve got a meeting

Make a big song and dance about how you’ve got a 1-2-1 with the head of HR so you won’t be free for a while. Ironically, if you accidentally leave your webcam on and everyone sees you slumped on the couch doomscrolling Twitter, this fantasy will soon become a reality.

Social media is all about creating a false identity, and there’s nothing more deceptive right now than the idea that you’re beavering away on an urgent report. All it takes is a few photos of you sternly glowering at your screen while chewing on a pen and you’re home free. For added authenticity, share them on LinkedIn.

These magic words will instantly create an illusion of industrious productivity. While everyone has been fretting about the result, your nose has been so close to the grindstone that you weren’t even aware of it. If anything you probably deserve a raise.

Go for a ‘fag break’

You can only take a break if you’ve been hard at work, so by popping out for a smoke you’re suggesting you’ve been busy grafting. Then go and study the news on your phone, although the stress of following the election is probably worse for your health than smoking loads of fags.