Europe Destroyed By Curse Of The Leprechaun

EUROPE lay in tatters last night, ravaged by the strongest leprechaun curse in over a decade.

Little people across the Emerald Isle drank whiskey, smoked pipes and danced jig after jig late into the night in celebration of their successful spell.

The savage curse was placed by Finnan O'Flaherty, a grade six leprechaun from County Kerry.

He said: "Oi be tellin' ye now, by the light of a full Spring moon, ye'll not be ratifyin' a treaty that leads to structural reforms of the Council o' Ministers agricultural sub-committee.

"Oi'll be skippin' down Killarney high street with a daisy in me cap before I'd be allowin' such a passage of affairs."

O'Flaherty said he added extra potency to the evil charm by drinking a special brew of cowslip and dandelions, chased down with a half-pint of Bacardi and coke.

But the issue has led to deep divisions within the leprechaun community with many little people claiming the curse could backfire and destroy the country's bottomless pot of shiny European gold.

Ireland's biggest-selling leprechaun newspaper the Killarney Bucket, last night devoted its front page to a strongly-worded attack on the curse, under the headline, 'O'Flaherty, ya great fuckin' eejit!'. 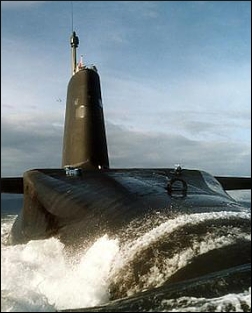 THE government faced fresh embarrassment last night after a Vanguard class nuclear submarine was found on board a commuter train.

A junior Cabinet Office official has been suspended, while home secretary Jacqui Smith has been told to hand back her keys to the Tower of London.

HMS Vengeance was discovered by Julian Cook, a trainee solicitor, during his 45 minute journey from Luton to Kings Cross ThamesLink. Mr Cook immediately handed the vessel, and its 135 crew, to the BBC.

He said: "I was actually going to the toilet when I noticed the aisle was blocked by 16,000 tonnes of ocean-going holocaust machine.

"The moment we arrived at Kings Cross I dragged it onto the tube and headed straight for Shepherd's Bush."

After confirming it was a genuine submarine the BBC immediately contacted the Press Association who in turn passed it on to the editor of The Spectator.

The submarine was eventually handed back to the Royal Navy by the assistant features editor of Grazia.

The latest security breach comes just 48 hours after the aircraft carrier HMS Invincible was hijacked by a pack of dogs.

Meanwhile Al Qaeda has released a statement via Al Jazeera TV, outlining plans to shift its international HQ to the 7.45 from Croydon to Victoria.