F**k off, you're not invited anymore, UK tells Trump

BRITAIN has withdrawn Donald Trump’s invitation to visit and never really wanted him to come in the first place.

The UK has got sick of Trump complaining about protests and admitted his visit would have been horrific anyway.

Office worker Nikki Hollis said: “It’s not like Britain has got a shortage of horrible right-wing twats at the moment.

“Having him to stay would have been a huge hassle for the police and the Queen, and he’d only have wanted to go to Planet Hollywood for a ‘Terminator burger’.”

Electrician Tom Logan said: “I wouldn’t want Trump staying at my house because he’s the sort of obnoxious guest who would eat all the yoghurts and freak out about not having his own bathroom.

“Therefore I’ve decided not to invite him to my country. He wouldn’t have got much out of visiting Stonehenge or Tate Modern anyway because he’d constantly be fiddling with his Twitter.

“Usually when some twat relative from abroad cancels a visit you have to pretend to be sad, like when Uncle Darren from Germany couldn’t come because of his bad leg.

“That’s not the case here though. Fuck Trump.”

Increasingly disturbed May trying to forge alliance with squirrels 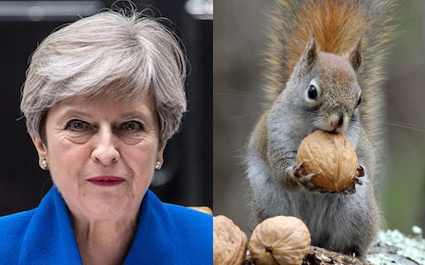 THERESA May has been spotted in a park trying to coerce a squirrel into joining a coalition.

He said: “She had a squirrel cornered against a tree, saying they had strong mutual interests.

“She said mammals who have the foresight to create a winter food stash deserve to be rewarded, and that she could introduce strict laws protecting nuts from magpies.

“The squirrel looked totally freaked out, it was on its hind legs making a high-pitched defensive sound.”

Squirrel Roy Hobbs said: “As a squirrel, you don’t really expect to be a political kingmaker. Power is meaningless to us, we crave only the safety of a branch and a poorly-designed bird feeder that you can steal from.”

He added: “She needs to get some sleep, she looks frightening.”