GUARDIAN readers were today in mourning for a man who would have banned the Guardian if it was in Venezuela.

The death of President Hugo Chavez has robbed Britain’s left wing of an heroic figure whose bravely authoritarian regime stood up to America and journalism.

Julian Cook, from Finsbury Park, said: “He was sort of democratically elected and in many ways Venezuela was kind of almost a free country. I’ll miss him so much.”

Emma Bradford, a level six Guardian reader from Stevenage, added: “He introduced free healthcare and free education and if you have those two things then why on earth would you need a free press?

“Yes, we have those things in Britain and we have a free press, but – for our sins – we are much more complex than the noble Latin American peasants.”

She added: “I only use Venezuelan petrol in my Saab because it has been properly taxed.”

Tom Booker, from Hackney, added: “Journalists would have had a much easier time in Venezuela if they had just agreed with President Chavez. If you read his autobiography you’d realise that he was actually very nice.

“The oil tax paid for precious, beautiful things like schools, hospitals, secret police and the wildly popular TV show Stop What You Are Doing and Listen to the President.”

Meanwhile, tributes were also paid to Chavez by the usual arseholes.

Ken Livingstone, George Galloway and Gerry Adams all said he was a great man, which is pretty much all you need to know about Hugo Chavez.

Overweight people have no heads 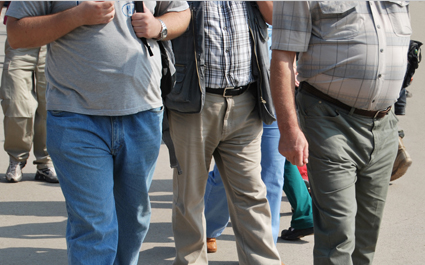 THE overweight torsos seen in television news reports have no heads attached to them, it has emerged.

Professor Henry Brubaker said: “Most people assume that the portly pedestrians in TV reports about the ‘obesity crisis’ had heads which are deliberately kept out of shot.

“In fact they are an altogether new breed of tubby, headless human.