US SECRETARY of state Hillary Clinton has finally answered the Congolese student who wanted to know her husband's opinions, by shoving a large cigar up his backside.

Following a question and answer session in Kinshasa, Mrs Clinton went to the home of the student where two secret service bodyguards handcuffed him and bent him over a table.

Removing a nine-inch long Montecristo cigar from her purse, Mrs Clinton said: "Here's what my husband thinks about China's multi-billion dollar loan offer to the Congo."

Inserting it forcefully into the student's rear passage, she continued: "I suppose you could say that I'm 'channeling' my husband – and you – as we speak. How does that feel?"

Mrs Clinton added: "My husband might also say, 'I have not been in the White House for eight and a half years, whereas my strong, intelligent wife is not only the secretary of state but also – by the way – came within a whisker of being the Democratic candidate for President of the United States'. You fucking prick."

Mrs Clinton then smacked the student on the back of the head and left him with his trousers down and approximately half an inch of the cigar still protruding from his quivering buttocks.

The secretary of state said later: "In case anyone else is wondering, my husband's views on diplomacy and international relations tend to be limited to the quality of the local 'poon-tang'.

"I have no doubt that when I get back to Washington he will be desperate to know whether Congolese women are up for it and whether the hotel I was staying at offered hot, pay-per-view African skin-flicks."

Gypsies Handed &#163;5m To Get On Daily Mail Readers' Tits 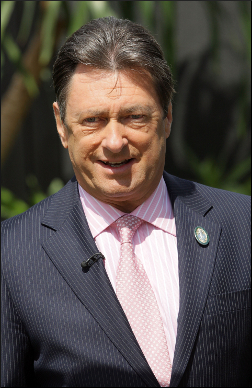 BRITAIN'S Romany gypsies have been given a £5 million grant to do whatever they want as long as it infuriates the shit out of Daily Mail readers.

Officials hope the gypsies will use some of the money to buy land next to a cul-de-sac in Guildford where they will establish a permanent bonfire and allow their children to ride their quadbikes over local rockeries while shouting sexually explicit swearwords.

A spokesman for the Department for Persons of the Road said: "Or they could burn a massive wicker man filled with Union Jacks, Songs of Praise DVDs and Alan Titchmarsh.

"Or they could host a gay pride festival for bristly mongrel dogs dressed in burqhas and frilly suspenders. Whatever floats their boat."

June Fothergill, from Stevenage, said: "Naturally I am both shocked and disgusted that gypsies, who do nothing but bake hedgehogs in clay and use their magic to sterilise horses, should be handed a seven figure sum just to irritate my breasts.

"However, as a Daily Mail reader, I do derive sexual pleasure from being frightened and thrive on paranoid hate and ill-informed bothermongering in much the same way that a cheeseplant thrives on sunlight. So in that sense I'm a bit conflicted."

She added: "I suspect I shall have to reserve judgement until Mr Littlejohn has given me my orders."

Romany people have their own set of equally superstitious beliefs about Daily Mail readers, believing them to be a race of lesser beings who evolved from owls, sleep in bathtubs filled with liver and make ice lollies from cat urine.