Independent Scotland could be exactly the same, warn experts

As the SNP set out its timetable for an independence referendum, the party was dealt a devastating blow after research showed separation from the UK would make absolutely no difference whatsoever.

Professor Henry Brubaker, of the Institute for Studies, said: “It will still be damp, windy and miles from everywhere.

“The Scottish people will continue to shop, drink, complain, work for the council, eat beige food and hate each other because of football, religion or some bastard hybrid of the two.

“They’ll watch the same TV programmes, mainly because they have all seen Scottish programmes and they’re not making that mistake again.

“They will also retain their baffling sense of entitlement and the government will still interfere constantly in people’s lives. The only thing that will change is that they’ll be reduced to one set of fucknuts on which to pin the blame.”

Brubaker added: “Meanwhile, the rest of the UK will also remain exactly the same, only more so.”

The Scottish National Party condemned the research as racist stereotyping and then welcomed it for proving that independence would be completely risk-free.

French get chance to vote for magnificent bastard 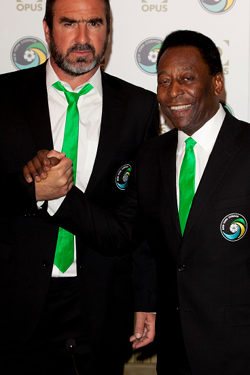 FRANCE has a once-in-a-lifetime opportunity to be ruled by a bastard of unparalleled magnificence. Eric Cantona is giving his fellow countrymen the chance to rise above ordinary mortals and elect as their president an athlete, poet, lover and trawlerman without equal.

Cantona has written to 500 local mayors across France urging them to do the most amazing thing that anyone has ever done by nominating him, thus paving the way for the greatest government that is possible in all possible worlds.

Speaking in poetry from the top of the Arc de Triomphe, Cantona said: “Heaving the broken body of France onto his shoulders, the dawn streaming golden behind him, he crosses no man’s land and the guns fall silent.

“Commanding submission with the endless desire in his eyes, he karate kicks injustice right in the chest.”

Moments later a football with Nicolas Sarkozy’s face painted on it appeared from nowhere, but Cantona controlled it as if it was attached to his foot with a piece of elastic before volleying it into a goal 600 miles away.

As shafts of blinding white light appeared from his finger tips a million invisible church organs reached a perfectly harmonious crescendo and the Eiffel Tower bowed to him and pledged its allegiance.