Loving This, Admit Israel And Hamas

ISRAEL and Hamas last night admitted the latest wave of deadly violence was one of the best they had seen in years.

As the international community condemned Palestinian rocket attacks against southern Israel and the corresponding Israeli air strikes in the Gaza Strip, both sides agreed it was ‘more fun than a barrel of heavily-armed suicide monkeys’.

Israeli prime minister Ehud Olmert said: “You’ve got to hand it to Hamas, they are the dog’s bollocks when it comes to unrelentingly insane terrorist opponents.

“Fatah and Mahmoud Abbas are so sensible and tedious. It’s all talking and protesting and chucking a few rocks once a week. Sure we can flatten a few streets but it’s not the same. Rocket attacks mean you can go balls-out crazy apeshit.

“I just love Hamas. They really get us.”

Meanwhile a Hamas spokesman said: “Hats off to the Israelis, they’ve done it again.

“This is the sort of top drawer, high quality violence that could keep us all going for years and years. Vintage stuff.

“In fact, if I wasn’t a Muslim being attacked by Jews I’d say it was the perfect Christmas present.”

He added: “Imagine if they invade! No, stop, I don’t want to jinx it.” 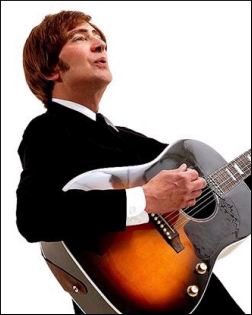 BEATLES legend John Lennon has been impersonated in an advert for the first time since his death 28 years ago.

A man who sounds a bit like Lennon features in a new video for the One Laptop Per Child Foundation.

The impersonator, approved by Lennon's widow Yoko Ono, urges the world to 'imagine' what it would be like if every child had a laptop and could 'access a universe of information' and Google Ads.

Tom Logan, secretary of the British Association of John Lennon Impersonators (BAJLI), said: "John Lennon impersonators have always been committed to ending poverty and promoting world peace so we were more than happy to endorse this project."

He added: "We'll never really know if the real John Lennon would have supported it, mainly because his last known whereabouts was a jar on Yoko Ono's mantelpiece.

"I suspect however that he would have, given all those songs he wrote about cheap computers being more important than food and hospitals."

A spokesman for the OLPC Foundation said: "We had thought about using footage of him singing Imagine, or an excerpt from an interview where he says something meaningful and profound, but, for some reason, neither of them included the word 'laptop'."

OLPC confirmed the next advert would feature a Lennon impersonator performing a new version of Imagine but with specially updated lyrics: