RESEARCHERS have discovered huge craters in Siberia that would be perfect for a rave.

Scientist Mary Fisher said: “These things are vast, and may be caused by underground gas explosions which are a deeply worrying new consequence of global warming.

“But putting that aside, you could get a really bad ass sound system and loads of ravers in each one.

“The acoustics would be mental and there are no neighbours to disturb on this vast icy peninsula.

“I would probably have minimal house and techno in the biggest crater, with smaller deep house and jungle craters, and a chill out crevasse.

“Everyone would get really mashed, they would be loving it.”

Binge drinkers ‘most intelligent and sensitive’ 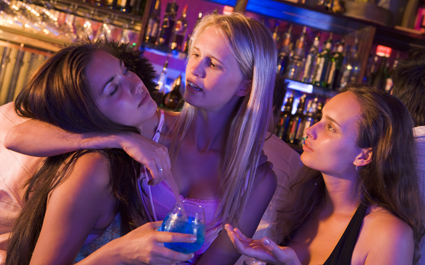 BINGE drinkers are highly sensitive intellectuals coping with the inherent pain of human existence, it has emerged.

Despite appearing to be anti-social hedonists, binge drinkers are courageous individuals who have considered their meaningless existence in an infinite cosmic void and decided to get pissed.

Data inputter Wayne Hayes said: “For me, war and famine preclude the existence of a loving god, which is why I am drinking 15 Sambucas in a rammed chain pub.

“Later I shall probably cop off with a fat girl I don’t really fancy just to take my mind off the fact that everyone and everything I know and love faces certain oblivion.

“There is no God, however there is lots of booze.”

Waitress Nikki Hollis said: “I believe Shelley best encapsulated the futility of human endeavour with the line ‘Look on my work, ye mighty, and despair’ from the 1818 poem Ozymandias. I expect he shat himself in kebab shops too.

“Once you’ve seen the truth, four bottles of Lambrini is the only rational option. To paraphrase Nietzsche, I have looked into the abyss and been sick in it.”

Recent attempts by the police to reduce binge drinking by handing out life-affirming pictures of kittens, sunsets and loving families failed after drinkers said their fragile beauty was too poignant.