NORTH Korea has been designated as the new big thing designed to scare the holy living shit out of you, the United Nations has confirmed.

Bookies’ favourite Iran responded last night by threatening to kill a bucket of puppies, but the move was immediately dismissed by North Korea who stressed that was what most of its population would be having for its tea.

Experts say the decision will lead to an endless series of Sunday Times articles about Kim Jong Il’s army of robot soldiers as well as a new wave of North Korean-themed hats, t-shirts and badges being worn by people who understand nothing.

More importantly the new designation means emotionless North Koreans will replace olive-skinned Arabs as the default villains in the next generation of Hollywood thrillers.

Security analyst and film critic Julian Cook said: “At the moment there is a shortage of heavyweight North Korean actors, so I’d imagine that for the first few years they’ll have to rely on Pete Postlethwaite.

“He somehow managed to pull-off Mr Kobayashi, the Japanese criminal fixer in The Usual Suspects, even though if you look closely it’s obviously just a bloke from Warrington in a bit of eye make-up.”

He added: “Personally I’m hoping Sean Connery can be coaxed out of retirement to play a North Korean submarine commander whose unsophisticated rural accent makes him sound exactly like a Scotchman.” 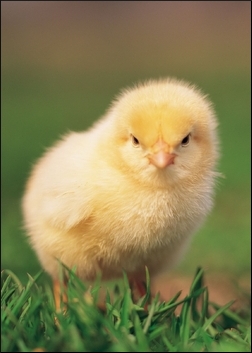 EDUCATION secretary Ed Balls has called on primary schools to allocate places to baby chickens in a bid to improve results.

As recent research showed that week-old poultry have a better grasp of arithmetic than 75% of Britain's eight year-olds, Mr Balls said it was time to give tiny chicks full access to the state education system.

He said: "We must never forget the most important part of our education system is the targets I set based on the next Labour manifesto.

"If tiny chicks do the job then great, but I'm happy to use pigs, lizards, stoats, it doesn't matter as long as the fuckers can count to three."

Mr Balls added: "Chick enrolment will also reduce the cost of new school buildings as, by my reckoning, we can cram at least 800 of them into a filing cabinet.

"And it means we could sell off the rest of the playing fields, given that baby chickens have little or no interest in PE."

A pilot scheme will be launched after the Easter break when more than 4000 hatchlings will be delivered to Crays Hill primary school in Essex in a bid to push them up the league table.

The local education authority hopes the birds will help to deliver a 'B' grade average for the school, but if not they can always be gassed, plucked and deep fried in bread crumbs.