PRIMARK has denied its clothes are made in sweatshops in a statement sewn in sequins on a cardigan made in Bangladesh.

The budget clothes retailer is under the spotlight after a ‘cry for help’ note was found in some trousers, but have responded with a new line of shrugs bearing the slogan We Love Working Here and Everythings Fine.

Employees apparently worked non-stop through the night, ignoring all calls to take their legally mandated rest breaks, to produce clothes which are a testimony to Primarks ethical working practices.

Shopper Carolyn Ryan said: I was concerned, but this top which says We are definitely not slaves working in appallingly dangerous conditions has completely reassured me.

The chain-stitch embroidery theyve employed is absolutely exquisite, and incredible in a top that only costs 80p.

Im sure the faint odour of death will come out after a wash.

A Primark spokesman said: The hand-appliqued statement Primark is a completely ethical employer and we are honoured to be in their deniable supply chain on these pyjamas  produced, shipped and on sale in less than 24 hours  speaks for itself.

If you want a more detailed analysis of our employment policy then I can have one of our people in Dhaka put that on a t-shirt for you right away. 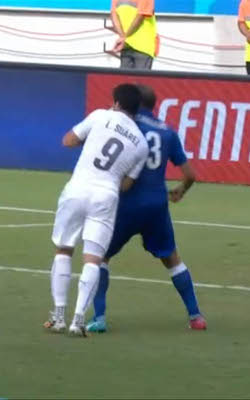 A DECADES-LONG conspiracy to discredit Uruguay and their star player Luis Suarez has been revealed.

The multi-billion operation, involving body doubles, faked footage and carried out with the full cooperation of media organisations across the globe, was co-ordinated by MI6, the CIA, and Mossad under the direct control of David Cameron and Barack Obama.

Why? Not because anyone wanted to see it, but in order to develop the CGI techniques that, 20 years later, would be used to fool the world into thinking they had seen Luis Suarez actually biting a man on a football pitch.

The wars in Iraq and Afghanistan were a smokescreen, funnelling billions into the ongoing program to discredit our countrys hero and stop Uruguay replacing the dollar with cattle as the reserve currency.

Every photo of Suarez ever taken has been Photoshopped to make his teeth look bigger and hungrier to subliminally prepare the world for our masterstroke.

Youd think we had better things to do, but we didnt.

Stephen Malley of Merseyside said: Oh come on. Its absolutely ridiculous to suggest that theres a massive international conspiracy to stop the Uruguayan side reaching their rightful place at the top.

Its clearly all aimed at Liverpool.