SCOTLAND has welcomed a letter urging the country to reject independence, signed by a collection of fancy English celebrities.

Bill McKay, from Bathgate, said: “I imagine Judy, Helena and Simon all got round a big farmhouse-style kitchen table in Hampstead.

“And Judy said ‘I’ll get Tracey Emin, Melvyn Bragg and Richard Dawkins’, and Helena was like, ‘I’ll get Emma Freud, Richard Curtis and Ben Fogle’ and Simon was like ‘I’ll get Cilla Black, Ray Winstone and Gloria Hunniford – you know, for the Glaswegians’.

“And then they wrote a lovely letter about how lovely everybody is and that we must come for tea, just like that poor bloke in Howard’s End who gets killed by the bookcase. 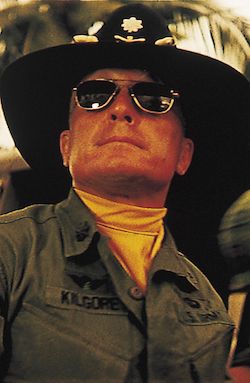 A SENIOR US army officer has revealed he was hurt after Jeremy Clarkson pretended not to know him.

Clarkson thought this was Dustin Hoffman in ‘Tootsie’

Air cavalry commander, Lieutenant Colonel Bill Kilgore, said he and Clarkson had met several times since 1979 and that the Top Gear presenter always seemed to enjoy his company.

Kilgore said: I would tell him stories about my days in Vietnam. About how I used to play Wagner from the choppers as we attacked coastal villages. He asked me why and I said because it scared the hell out of the slopes.

And then he asked what a slope was and I said its a racist term for an east Asian person. And he though that was very funny.

I’d explain that it wasn’t supposed to be and it was actually one of the ways in which we expressed our fear and hatred, but he just giggled.

And then I would tell him to sniff some napalm every morning. And then I’d talk to him about surfing for six hours.

Kilgore added: Anyway, I bumped into him last week and he completely blanked me. It was as if we hadnt met each other at least two or three times, particularly when he was a student.

I was so disappointed, because I wanted to tell him that I had just got back from holiday in Vietnam and that not only do the Vietnamese surf, theyre actually very good at it.