RUSSIA trying to subvert our democracy? Bo-ring. Who cares? Not the Tories. Here’s seven other plots against Britain we should never have looked into:

So Putin wants to kill a couple of traitors? That’s only how Sun readers feel about the Isis Bride. We should have let him get on with using his extravagantly toxic nerve agent and if Salisbury had to be abandoned completely, hey.

The assassination of Alexander Litvinenko

Perhaps a quiet word about the mess caused when strewing polonium-210 around central London wouldn’t have upset anyone, but ideally Britain would just have put it down to one of those things and moved on.

When the KGB’s gone to all the trouble of devising an umbrella that fires poison pellets to covertly kill a Bulgarian dissident, drawing attention to it is terribly gauche. Convey your respect for their craftsmanship through diplomatic channels.

Espionage used to be a career for gentlemen, and what gentlemen would have done when discovering double agents in their midst is say nothing rather than face awkwardness. Kim Philby would have made a damn fine head of MI5 if he’d been given the chance.

General Orlov wanted to advance Soviet interests by detonating a nuclear warhead on a US Air Force base in Germany. Well, what business is that of ours? We’re none of those three countries. James Bond should never have left the office.

Krushchev could have been building missile launch sites in Cuba for highly personal reasons. Better not to pry. And if the world had been destroyed in a nuclear war, wouldn’t it be better to say ‘nothing to do with us’?

Neighbours surely can't fit any more shit in their garden 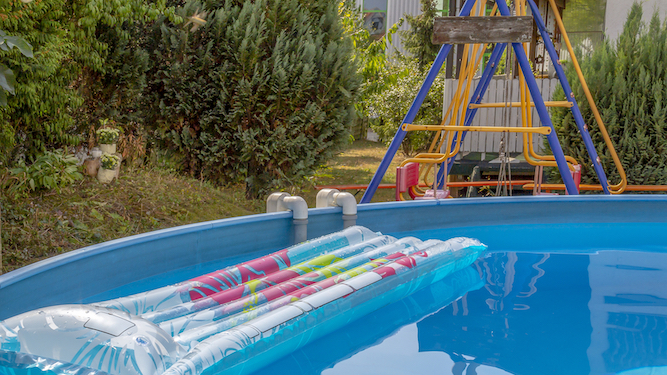 THE family next door surely cannot fit any more shit in their garden, say concerned neighbours.

The Baxter family have spent the past few months steadily filling the outdoor space of their semi-detached new-build house with various entertainment items, to the point that it now resembles the map of a theme park.

Neighbour Nikki Hollis said: “They already had a sizeable shed. Then came the greenhouse, then the swing, then the f**king massive trampoline.

“I thought that’d be it. That was still April. Then they added outdoor sofas, a barbecue, a chiminea and what appears to be either a sculpture or some sort of sacrificial altar.

“Then yesterday there’s this blue thing, beyond the second shed, that appears to be an outdoor pool. Surely that’s it? Surely that’s the limit?

“The strange thing is that we never see them out there any more, probably because it’s so hard to navigate. But their cats are having a great time.”