BLOW jobs are an official unit of currency in Magaluf, it has emerged.

Local resident Tom Booker said: “Anyone here will tell you that a glass of wine costs a blow job, just as a loaf of bread is four hand jobs. My house, for example, is valued at 10 swinging parties and an S & M session.

“I don’t see what all the fuss is about.”

Magaluf’s sex currency was introduced back in the 13th century when the island was part of the Emirate of Cordoba and the system prevails despite residents frequently complaining of sore wrists and locked jaws.

“They should stay home and engage in good wholesome pursuits, like reading poorly-written tabloid articles where actresses describe their body anxieties while posing for stilted quasi-lesbian beach shots.” 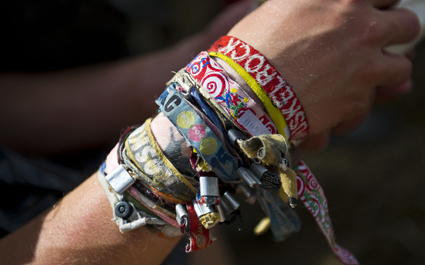 PEOPLE wearing expired festival wristbands are a limitless source of tiresome drug anecdotes, it has been claimed.

The general public has been warned against mentioning the wristbands to their wearers, who are constantly ready with monologues that are ostensibly about music and drugs but really just about how amazing they are.

A police spokesman said: “‘Banders’ will pretend to have forgotten to remove their festival passes because they are free spirits who live in the moment and are too spontaneous to own a pair of scissors.

“Clearly this is bullshit. They’re itching to tell you about some beautiful experience in the healing field that changed them in ways you, a hapless slave of the system, can barely begin to comprehend.

“They deserve to be hit with a stick.”

28-year-old bander Tom Logan said: “Oh, this Glastonbury 2014 VIP Access All Areas wristband in limited edition cerise? I forgot I even had it on.

“But since you ask I had the most beautiful Glasto experience where I took some acid, thought it hadn’t worked then woke up in my yurt at 6am tripping my tits off.

“I walked up a hill where there was a robot sculpture made of old cars and sat watching the clouds. But they weren’t normal clouds, they were deep clouds.

“Then a girl wearing fairy wings gave me some of her Orangina and we went to see some bands.”

The police spokesman said: “Also be wary of people wearing a ‘festival crew’ t-shirt in the pub or anyone driving a van that has a ‘Crew Parking Shambala 2009’ sticker on the windscreen.

“It’s probable they will be fake hippies, but genuine dickheads.”