SWEDISH ministers have announced a six-hour working day as part of plans to make their country more stereotypical.

The policy is one of several designed to bring Sweden in line with the caricatured view of the country held by other nations, particularly Britain.

Prime Minister Fredrik Reinfeldt said: Sweden leads the world in progressive social policy, but frequently visitors are disappointed that we dont spend all our time assembling Ikea furniture in the nude.

From now on all Swedes will have to spend at least 20 hours a week doing Swedish things, such as having a sauna and beating themselves with twigs while feeling totally unashamed of their naked bodies.

We will also be deporting any women who are not tall, blonde and stunningly attractive. This may sound harsh, but its the only way to create the Volvo-driving, porn-using, smorgasbord-eating stereotype that the outside world loves so much.

Reinfeldt said other policies would include banning all music that was not Abba-style disco-pop, which would be a blow to the countrys many rock musicians, hip hop artists and classical musicians, but would be popular with tourists.

Briton Roy Hobbs said: I went on holiday to Sweden and for some unfathomable reason I didnt have sex with any Swedish women. Fortunately Thomas Cook apologised and gave me a full refund.

I did see a man on skis taking a reindeer for a walk, but that was a pretty poor substitute for 14 nights of passion with blonde nymphomaniacs.

Pet snakes 'a cry for help' 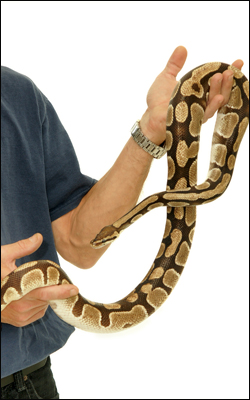 ANYONE who owns a pet snake is secretly begging for someone to stop them, psychologists have agreed.

Snakes, which do none of the things a pet does but can kill you, are usually kept by men who own leather trousers, decorate their homes with skulls and really just want to be married with kids.

Dr Mary Fisher explained: “Snakes spend 22 hours a day motionless and largely invisible at the back of their tank.

You can’t stroke them, take them for walks, dress them in cute hats or do any of the other things that let us pretend pets aren’t just our captives.

The only reason to keep a snake is so people think you’re hard. But they won’t. They’ll just think ‘That guy’s so sad he has a pet snake.’

“The only exceptions to the rule are strippers, who need snakes for Double Shots Thursdays, and manufacturers of draft excluders who need live models.”

Wayne Hayes, who owns two pythons called Bastard and Other Bastard, said: I open their tanks so they can entwine about my body, making me feel like an evil god, but instead they just go under the radiator.

“I pretend they have distinct personalities but really the only difference is that one blinks slightly more than the other.

Though I do find the frozen mice I keep in for them make a fantastic post-pub fry-up.