The white van man's guide to going on holiday

TIME for a well-earned break from being the salt of the earth? Here’s how to be bigoted and furious somewhere hot full of foreign bastards:

You can’t take the van with its St George flags, so always wear an an England top, Union Jack sunhat or Brits On Tour T-shirt listing D-Day and Dresden. Pack St George crosses for your hotel room and hire car. When foreigners shake their heads and sigh, it’s because they’re ashamed of being shit in the war.

You wouldn’t sit in traffic like a mug when you could cruise up the hard shoulder or mount the pavement, would you? Customs is exactly the same so go straight to the front. They’ll defer to your race’s historical achievements like Agincourt.

Not so much from a hygiene aspect – foreign food has come a long way – but because when you get home you’ll want to make jokes about them eating weird shit like squid. The last thing you want is your kid saying ‘You couldn’t get enough of those grilled sardines, Dad’.

You don’t need a van to shout abuse. Does a waiter fail to instantly understand your order? Use your fluent Spanish: ‘QUATTRO FULL-O EENGLEESH, PEDRO!’ Bar toilets not immediately obvious? Shout ‘WHERE. EEZ. THE. F**KING. BOGS?’ If they’re not willing to learn English they should work down mines and shit.

Begin mornings by the pool with a bit of history, such as how Sharpe’s Rifles defeated the Spanish Armada. It’s hard to beat the sense of parental pride when months later your youngest says: ‘The Spaniels are a bunch of wankers, aren’t they, dad?’ ‘Cowardly wankers, son,’ you’ll say, misty-eyed.

Show them how to drive

First thing you do in your hire car is stamp your authority on the roads. They drive on the wrong side, but your advanced driving skills like tailgating, overtaking on blind curves and controlling a vehicle while shouting obscenities will transfer over. They might not understand every word of ‘arsehole’, ‘f**k off’ and ‘greasy bum-boy’, but they’ll get the gist.

Spending your holiday in a state of rage while eating three fried meals a day is giving the old ticker a proper workout. But it’s worth having your insurance just on the off-chance that your heart explodes.

Wave your debit card: the wanker's guide to getting served at the bar 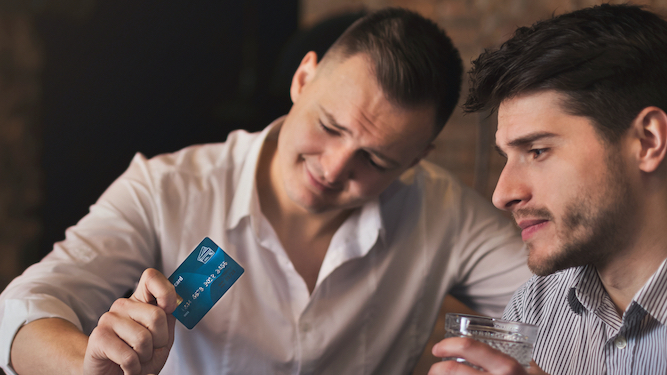 LOOKING to get drinks at your busy local, and also a wanker? Follow these tips and you’ll have an irate member of staff pulling your pint in no time:

‘I was here first’

When you’re queueing at a bar, every other person there is an obstacle getting between you and your next Hoegaarden. They must be eliminated. Sharpen your elbows and proclaim to everyone that you were there first, actually. The bartender, who’s always listening, will admire your eagerness, trust you implicitly and serve you next.

If you see someone getting served ahead of you, there’s nothing more effective than loudly tutting. The miscreant will shrink back in shame, the barstaff will take note, and you will be remembered as a humble servant of justice. Especially effective in bars blasting out Megan Thee Stallion at 80 decibels.

Like the T-rex, a bartender’s senses are attuned to movement. They’re physically unable to see anyone who’s just calmly standing at the bar, still and waiting. It’s crucial to frenziedly wave your bank card like a twat to kick them into gear – and remember, the cooler and more exclusive your card, the faster you’ll be served.

Aggressively tapping your foot is a brilliant way to remind any service industry employee that your time is worth more than theirs. They’ll be overcome with remorse for keeping someone as important as you waiting. Allay their fears by saying ‘No need to apologise. Two Kronenbourg and a packet of chilli nuts, please.’

Complaining about the service

What to do if there’s one stressed lone employee fending off dozens of customers crowding the bar? Audibly complain about what a poor job they’re doing. Surely any barman should be able to simultaneously make 13 complicated cocktails while pouring a Guiness and uncorking wine. Constructive criticism is the only way they’ll improve.